This year, there’s more overlap with the Oscars 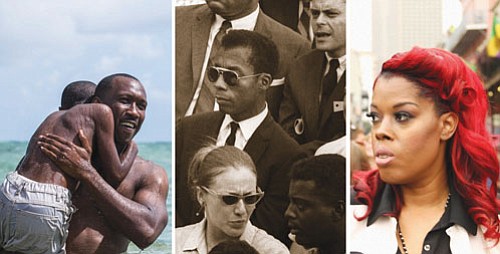 (From left to right) “Moonlight,” portrays African-American males as beautifully complex , and avoids reducing them to the flimsy stereotypes so often presented on-screen. The Oscar-nominated movie is the best film of 2016 as rated by Opinionated Judge Darleen Ortega, the Portland Observer’s film reviewer. “I Am Not Your Negro” uses archival footage of the Civil Rights and Black Power movements to explore the racial violence that continues to permeate American culture. Samantha Montgomery in “Presenting Princess Shaw,” in inspired film about a talented singer who becomes an Internet sensation after toiling in obscurity for years.

I see more than 150 films each year, including all the films nominated for Academy Awards for Best Picture and Best Documentary and nearly all those nominated for Best Animated Feature and Best Foreign Language Film. This year my list of the 10 best films out of all of those I saw shares more overlap than usual with the Academy Awards -- perhaps in part because of the pressure on Hollywood to notice the work of artists of color, which tend to dominate my list. Often the most remarkable work is done from the margins, never more so than in times of increased oppression and flux. So here's the whole list, with fuller descriptions and links below:

"Moonlight": This is that rare year when a universally acclaimed film deserved and received a host of Oscar nominations along with a lot of other awards -- and, in an unprecedented twist, it is a movie that presents African American men and boys at a level of complexity that we rarely see on screen. Take a note: It is written and directed by two black men. Lifting up the stories of those at the margins must include a commitment to giving them agency to tell their own stories. If this film loses out in the best picture and director category to the vastly overrated "La La Land," my voice will be included in the chorus of groans you may hear. You can find my original review here: http://portlandobserver.com/news/2016/nov/15/rare-film-embrace-black-experience/. [Not rated; nominated for, and should win, Academy Awards for Best Picture, Best Director, Best Supporting Actor (Mahershala Ali), Best Cinematography, Best Film Editing (co-editor Joi McMillon is the first African American woman nominated for an editing award!), Best Adapted Screenplay, Best Supporting Actress (Naomie Harris) and Best Original Score. Moonlight is also on the top 10 lists of at least 189 other film critics.]

"I Am Not Your Negro" is so powerful and so resonant that it is really too much to absorb in one viewing. Director Raoul Peck has assembled the script from only the words of James Baldwin to provide a window into race and racism in America that is truly without parallel; every view moments I wanted to pause to absorb the profundity of what had just been spoken. Much is in Baldwin's own voice, including footage from an astounding 1968 television interview by Dick Cavett that would have been mind-blowing if it had happened yesterday; the rest of Baldwin's words are uttered by Samuel L. Jackson. The power of the words is aided by images assembled from the civil rights era but also from the current day. Baldwin speaks prophetically -- and by that I do not mean predictively, but in a voice so clear and true that it is outside time, even now, decades after he uttered them. Baldwin is mindful of his location as what he terms a "witness," rather than someone attempting to lead a social movement; he lived a significant period of time in Europe and returned to engage with the American civil rights struggle largely from the position of astute observer and friend to its leaders. The clairvoyance Baldwin displays from that vantage point makes the case for the prophet, and specifically, this prophet, an African American gay man. This film is the best documentary I have seen in a very, very long time, and I expect to return to it again and again. [Rated PG-13 for disturbing violent images, thematic material, language and brief nudity; nominated for, and should win, the Academy Award for Best Documentary Feature; on at least 26 other critics' top 10 lists.]