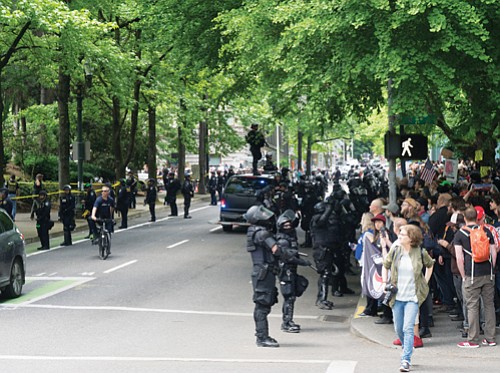 The initial demonstration, which was billed as a “Trump Free-Speech Rally,” by its organizers, took place on the federally-owned Terry Schrunk Plaza, which faces both City Hall and the Edith Green – Wendell Wyatt Federal Building. In response to the alt-right’s demonstration, a loose collection of labor unions, immigrant rights groups and anti-fascist organizations showed up to protest the presence of white nationalist groups in Portland. The counter-demonstration took place in neighboring Chapman Square, and was permitted by the City of Portland.

Officers from the Portland Police Bureau, the Oregon State Police and the Department of Homeland Security’s Federal Protective Service were present at the opposing rallies. Police made 14 arrests throughout the course of Sunday afternoon, and deployed crowd control munitions include flash-bang grenades, pepper spray and rubber bullets into Chapman Square. Police also seized dozens of weapons, including brass knuckles, make-shift shields and several bricks.