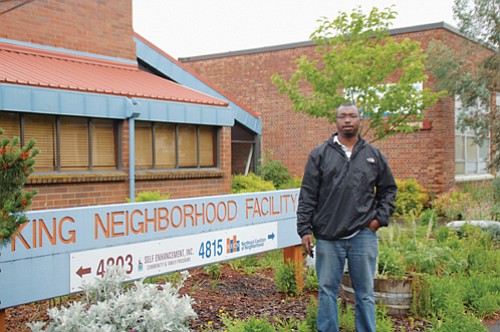 Good in the Hood festival organizer Shawn Penney is staying strong in the wake of a racist letter that threatened violence at the upcoming June 23-25 multicultural event and against him personally. With added security by Portland police and a community that refuses to buckle from fear and intimidation, the decision was made that the 25th annual Good in the Hood festival will go on as scheduled. Photo by Christa McIntyre

The multicultural Good in the Hood festival will go on as scheduled next weekend despite threats of violence as leaders from the diverse communities who participate in the annual celebration look toward increased security for the event, refusing to buckle to fear and intimidation.

The FBI, US Attorney’s Office of Oregon and Portland Police have taken steps to boost security at the June 23-25 festival and parade in the wake of a racist letter to Good in the Hood organizers that threatened a “blood bath” at the 25th annual event.

Good in the Hood is the largest multicultural art, music and food festival in the Northwest.

The community event is run by a non-profit board and is sponsored by the Northeast Coalition of Neighborhoods, the group which received the threatening letter on June 7. On the outside of the envelope was a picture of robed Ku Klux Klan members, a burning cross and what looked like an image of President Trump. The letter also appeared to have a blood stain on the back with a Band-Aid and the words “rush” written on it.

Good in the Hood President Shawn Penney said a NECN worker put on rubber gloves to open the letter. He then heard screams coming from another room as neighborhood representatives and festival volunteers began to read what was inside.

The letter was typed in all caps with many misspellings, racial slurs, and death threats. It also threatened Penney personally by describing the type of weapon that would be used for the effect of intimidation.

“I asked, what is a .30-06?” Penney said. Then, realizing it was a hunting gun, like the one that killed President John F. Kennedy, he shuttered at the thought.

“The U.S. District Attorney that’s assigned to the case called me and we talked for about two hours on the phone,” Penney said. “He gave me tips and advice on staying safe and said that an FBI agent was on his way to pick up the letter. We have never received a threat like this before at all. Never.”

Good in the Hood organizers actually started planning for better security for this year’s event when southeast Portland’s 82nd Avenue of Roses Parade was abruptly cancelled in April because of possible conflicts between Trump supporters and protesters, Still, Penney emphasized, they never expected to receive a threat.

“I’ve lived here all my life, and northeast Portland is my home,” Penney told the Portland Observer. He lamented over an increased sense of racism in the city in light of the recent racist incident on public transit that saw two men murdered.

“The last two weeks or so has just been hectic with hate crimes and the incident on the MAX,” he said.

Two days after Good in the Hood received the threats, rumors began spreading at King Elementary, located next door to NECN offices, that King students were being targeted with racist letters and graffiti. Officers from the Portland Police Bureau’s Youth Services Division and other officers responded to investigate but nothing was found.

The school disruption caused the cancelation of an end of the year school carnival, but fortunately, the King’s Parent-Teacher Association set up a fundraising page and by Monday over 180 people donated over $6,000 to reschedule the carnival.

Members of the community welcomed the news that security will be increased at Good of the Hood, but others said it was ultimately up to everyone to look out for each other.

“We know the same mentality that burned and shot up churches is still alive. But Good in the Hood will happen, people will get together with their friends, neighbors and family and celebrate neighborhood life,” said Nabeeh Mustafa, a local black activist who volunteers for an organization helping ex-convicts embrace life.

Penney is optimistic for a good turnout. Organizers are expecting 20,000 people to attend Good in the Hood.

“I’ve had an outpouring of support through social media, through phone calls, my email is overflowing,” he said.

Over 15 bands are scheduled to play over the three days of celebration. A market place will offer handmade goods from a range of ethnic backgrounds and a diverse group of entrepreneurs will have the opportunity to make their businesses more visible. Good in the Hood also has one of the largest kid’s event areas of Portland summer festivals with OMSI and Emanuel Randall Children’s Hospital hosting spaces. The local hip hop radio station WE 96.3 FM will host a new 3 on 3 basketball tournament.

The annual Good in the Hood Parade is held Saturday, June 24 at 11 a.m. starting from King School Park and following Martin Luther King Jr. Boulevard to Russell Street and west to the festival site at Lillis-Albina Park.

For a complete Good in the Hood lineup, visit goodnthehood.org.