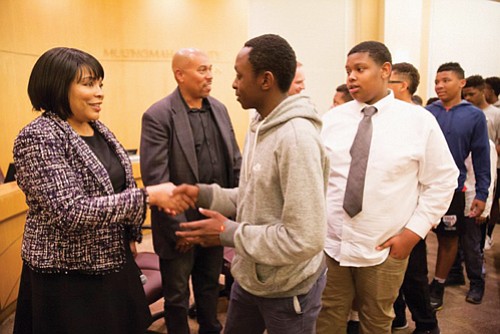 Smith hosted the Black and Brown Boys and Men Town Hall May 31 as a precursor to a meeting in Portland of the National Organization of Black County Officials.

Smith said that many of the racial disparities in Portland are issues mirrored in communities across the nation.

“We need to get to the bottom of it,” she said. “We need to figure out how can we decrease some of those disparities.”

Harper, who has authored books and starred in television and film, highlighted the current climate for addressing racial disparities and the key role that access to public education plays.

“It seems the political debate has become more and more preoccupied with power maintenance with very few real solutions ever offered,” Harper said. “Meanwhile millions of young men and women graduate from the streets and matriculate to prison rather than to college.”

Hill shared statistics on what he called a “hyper incarceration” crisis. About 2.24 million people in the United States are now held in federal, state, and local jails, representing one-quarter of the world’s total prisoners. Another 4.8 million people in the U.S. are under parole, supervision or probation. In 30 years, the United States’ prison system has quintupled.

Harper asked the panelists to address topics like sentencing disparities, law enforcement living in the communities in which they work, fear of police, and police training and recruitment.

“We need to sink our teeth into what we’re seeing here” to make policy adjustments, Underhill said.

Smith highlighted a Coalition of Communities of Color report which identified social, economic and educational barriers faced by people of color.

“You can’t achieve equity when you face challenges like this. Education should offer a pathway out of poverty but all too often it doesn’t,” she said.

Smith, who has championed jobs for young people in Multnomah County, focused on how a community supports its youth.

Melissa Navas is a communications advisor in the office of Multnomah County Communications.