Superfund cleanup gets ready for implementation 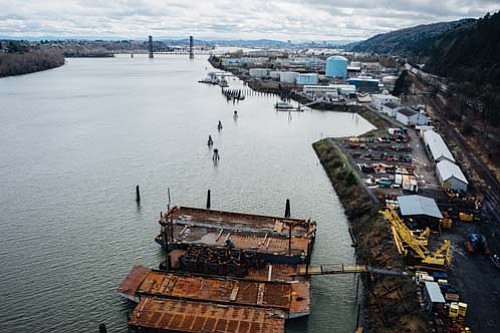 The Portland Harbor Superfund Site covers both sides of the Willamette River from Portland’s Broadway Bridge to Sauvie Island, and covers areas that have served both historically and currently as centers of heavy industry. Zachary Senn/The Portland Observer

Nearly 11 miles of the Willamette River’s most contaminated waters and shoreline is due to be cleaned thanks to a recently released Record of Decision from the U.S. Environmental Protection Agency. The Portland Harbor Superfund Site stretches from the Broadway Bridge to Sauvie Island and covers areas that have served both historically and currently as centers of heavy industry. A series of informational meetings being held in Portland this week will seek to educate community members and other stakeholders about the cleanup effort’s implementation.

Lumber mills, shipyards and chemical manufacturing along the river helped transform Portland into one of the Northwest’s most productive industrial centers. Today, however, nearly a century’s worth of toxic dumping and other environmentally destructive practices has transformed the Lower Willamette into a veritable wasteland of noxious contaminates and unhealthy wildlife.

In the nearly two decades since the Portland Harbor area was added to the EPA’s Superfund priority list, a series of studies were conducted to determine the extent of the site’s contamination, the feasibility and projected cost of a cleanup effort, and the health risks the pollution poses to both humans and wildlife. In the meantime, the Oregon Department of Environmental Quality took charge by leading a limited cleanup effort of a small portion of the upland shoreline.

According to a press release issued by the Portland Harbor Community Coalition, the city’s disenfranchised populations bear the brunt of the pollution’s negative effects.

“Communities of color and low income people have been most likely to live and fish in the area,” says the organization, which emphasizes the importance of bringing cleanup jobs to the affected communities. The coalition represents “Individual community members, community of color organizations, conservation organizations, environmental justice organizations, higher educational institutions, and Native organizations,” all of which are dedicated to the effective cleanup of the Lower Willamette, according to its website.

Balancing the needs of the various stakeholders has been one of the cleanup effort’s most challenging tasks. In issuing the Record of Decision, the EPA worked with community organizations, the DEQ and other state-level agencies, and local government to determine the most effective means of cleanup. Ultimately, thanks to the input of community members, the EPA has decided to avoid disposing of the waste in an in-river confined receptacle. In addition, the resolution increased the proposed area of active remediation for sediment by more than 100 acres. The total costs of the cleanup are estimated to be $1.05 billion, according to the EPA.

Some of the contaminates that have circulated through the Superfund site’s water, sediment, and soil include arsenic, the now-banned pesticide DDT, mercury, and a host of other heavy metals and noxious chemicals. The EPA has developed a list of Potentially Responsible Parties, which currently enumerates more than 150 possible polluters who are being held financially liable for the site’s cleanup. Included on the EPA’s list is the Port of Portland, Chevron U.S.A., Inc., Phillips 66 Company, and the Union Pacific Railroad Company.

Cassie Cohen, the founder of the Portland Harbor Community Coalition, says that rumors of possible cuts to the EPA’s budget by the Trump administration threaten the cleanup’s implementation. Cohen believes that with a weakened EPA, Portlanders should expect the companies liable for the site’s remediation to attempt to, “Slow or minimize the quality of Portland Harbor's cleanup.”