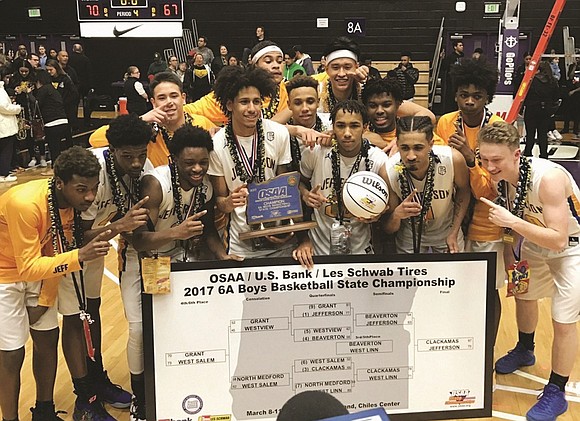 Jefferson High School proved it has what it takes to win no matter the level of competition by completing a nearly perfect season in basketball and winning the Oregon Schools Activities Association’s Boys Class 6A State Championship.

Led by seniors Geno West and Thomas Miles, the Democrats defeated Clackamas High School, 70-67, on Saturday, in the championship game played at the University of Portland’s Chiles Center. It was the ninth state championship in boys basketball for Jefferson and the first for the north Portland school at the 6A level.

West scored 28 points, including a 3-pointer with 2:50 left on the clock to put the Democrats ahead for good, and Miles added 20 points for the Democrats who were rated No. 1 going into state tournament play.

Jefferson finished the season at 26-1, the only loss coming to Gonzaga College out of Washington, D.C. The Democrats last won a state final in 2014 in Class 5A.

No. 3 Clackamas (24-4) was making its first appearance in the title game in 23 years. The Cavaliers were led by Elijah Gonzalez with 22 points. Matt O'Brien added 11 points and 10 rebounds.

Clackamas defeated No. 2 West Linn 78-71 in the semifinals to advance to the title game. Jefferson beat No. 4 Beaverton 63-54 in its semifinal, and defeated Grant, 77-61 two nights earlier. Grant High School, representing northeast Portland, finished in sixth place, beating Westview 52-45, before falling to West Salem, 70-73, in the consolation bracket final.

On the girls' side, No. 1 Southridge beat No. 6 Oregon City 45-27 later Saturday night at the Chiles Center for a 6A championship.