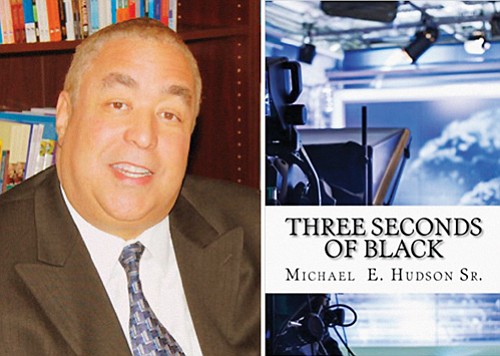 Behind-the-scenes insights into television broadcasting with stories that sensitively touch on subjects like racism, interpersonal relationships, and journalistic ethics are done with humor and wisdom in “Three Seconds of Black,” a new book by Michael E. Hudson Sr.

The Hollywood, Calif. native draws on his experiences as a black college student in Oregon in the mid to late 1970s, his early career in television in Southern California, and other life experiences, for a fictional story inspired by real events.

Hudson’s second book opens with a TV class instructor and his tips for future success in the industry, including the pitfalls of leaving a television screen blank. Focusing on Jerry, a television engineer living in the 1980s, the story follows his journey of self discovery after the loss of his friend, Frank. While Jerry shows the ropes to Frank's replacement, Jennifer, along the way readers are introduced to the serious concerns, as well as the antics involved in keeping a TV channel continuously broadcasting with entertaining and profitable programs.

Taking place in the fictional city of Serra, Calif., “Three Seconds of Black” provides light-hearted insights into the unpredictable world of television. The paperback was edited by Michael Leighton, who attended Pacific University in Oregon with Hudson and is the current editor of the Portland Observer, Oregon’s longest serving black newspaper.

Hudson is retired from a successful career in human resources and labor relations with the Los Angeles Unified School District.

“Three Seconds of Black” is available at Amazon.com and booksellers nationwide.