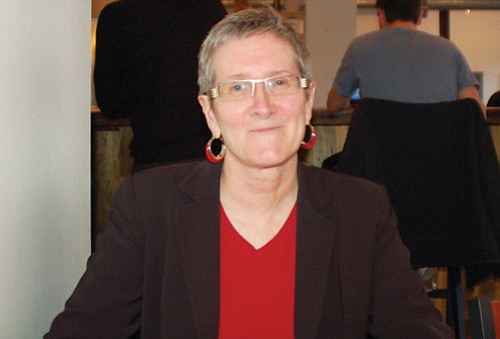 Rita Moore, a school activist, single mom and former college professor is running for the Portland School Board. Photo by Christa McIntyre

Portland Public Schools suffer from a chaotic and dysfunctional system of governance according to Rita Moore, a long time volunteer, parent advocate and school activist who is running for school board from Zone 4, representing north and northeast Portland.

Moore takes issues with current and past school board members who have supported her opponent in the election contest, Jamila Singleton Munson, a former teacher and principal and native Portlander from the African American community.

“The board needs to be paying attention and they haven’t been. If you look at who’s endorsed Jamila, you think she’s going to be the candidate to bring change? She has 4 current school board members endorsing her. These are the very people who brought PPS into the sorry state it’s in now,” Moore said in an interview with the Portland Observer.

Last year’s lead- in-school-water crisis peeled back a scab on the internal problems plaguing the school district and helped force former superintendent Carol Smith into retirement. Many problems which Portland Public Schools face are shared across the nation. Older buildings with crumbling plaster, cracks in walls and holes in ceilings and restrooms that aren’t working.

Newer concerns are homeless children being able to complete grades with the additional stress of unstable shelter and food. Long term concerns in the African-American community include the lack of teachers and principals of color.

Moore says the over disciplining of students of color and cultural sensitivity are still challenges which families face.

“We as a district need to do a much better job of listening to real people about real issues. We need to work with them to come up with solutions that actually work,” she said.

Zone 4 has its own unique set of obstacles with less supplemental funding to bring in additional supplies, upgrades and arts programs from school foundations and Parent-Teacher Associations, which in more affluent neighborhoods fill in the gap from budget cuts.

Moore grew up in Boston in a poor working class family and through public education was able to move into college, eventually achieving a PhD in Political Science. She’s studied political systems her entire life and spent 18 years teaching at the college level, including Portland Community College and Portland State University. Moore also taught abroad and her most recent position as a consultant with the Oregon Health Authority, which oversees the Oregon Health Plan.

A single mother, Moore faced her own personal battle with Portland Public Schools and found quickly that the work she did to advocate for her son was a full time job.

For the last 15 years, she has been a school volunteer and activist. She knows who’s-who and has attended many meetings and helps run a grassroots parent group on Facebook.

Moore said in traditional school board meetings parents are given three minutes to bring concerns to the table, but in her Facebook group, conversations grow lively and debates on issues are allowed to grow and find common ground to discover solutions.

She argues that Portland Public Schools is teetering on the edge, but with a new school board, new superintendent and clear vision can be fixed to serve its students and families.

The high turnover rate of principals and teachers is one area where Moore sees a breakdown in the system. She said principals are being given a huge workload of administrative duties from bureaucrats and not enough balance in their positions to be an educational leader and mentor to the teachers their schools.

She is advocating for the transition back to middle schools from K-8, to help reduce class size and give students the opportunity to be in a learning environment which puts them in step with the next phase of their education and helps get them in place to be college ready by high school graduation

Moore has been endorsed by the Portland Association of Teachers which has been backing school board candidates who oppose school administration, including the two current school board members who have endorsed her campaign.

“We have a new superintendent coming in and I think it’s really important for the board to establish a good working relationship. We’ve got to be a team. He’s going to need a school board who knows what’s happening,” she said.