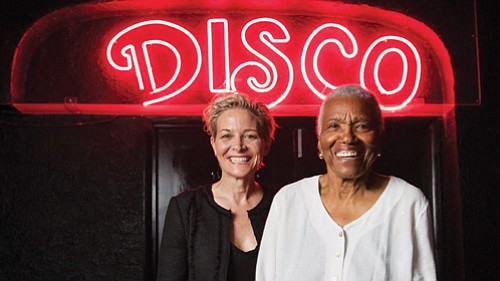 Film Director C. Fitz (left) tells the story of Jewel Thais-Williams in "Jewel's Catch One," a documentary about a black disco club owner in Los Angeles in the 1970s. The film will screen this week as part of the Portland Queer Documentary Festival at the Hollywood Theater in northeast Portland.

The Portland Queer Documentary Festival will be screening 12 recently produced films, including movies that include people of color and other documentaries that shed light on the realities of the queer experience, both current and historical.

Opening night for the four day festival at the Hollywood Theater in northeast Portland is Thursday, May 18.

“Jewel’s Catch One,” one of the festival’s featured films, tells the story of Jewel Thais-Williams and her popular Catch One nightclub in Los Angeles, which was referred to as the Studio 54 of the West Coast. The Catch One was a haven for members of the black LGBTQ community, and faced both homophobia and racism in the height of the AIDS epidemic. The movie will screen on Friday, May 19 at 6:30 p.m. with the film’s director, C. Fitz, and Thais-Williams in attendance.

The film “Bayard and Me,” will screen Friday at 8:45p.m., documenting the story of black civil rights leader Bayard Rustin and his fight to obtain legal protection for his decade-long relationship with his partner, Walter Naegle.

Chronicling the occasionally troubling tale of a prominent black queer activist, the documentary “The Death and Life of Marsha P. Johnson,” will screen Saturday, May 20 at 3:30 p.m., telling the story of Johnson’s life both before and after the Stonewall Riots, and the inconclusive evidence surrounding her apparent suicide.

For more information, tickets and a complete schedule, visit at queerdocfest.org.