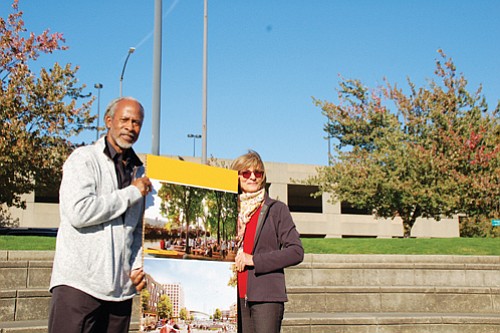 Now retired from the public and private sectors, Zari Santner and Michael Alexander are building momentum as volunteers and advocates for a plan to return the Rose Quarter area into a fully functioning, diverse neighborhood, keeping the sports and entertainment venues that now dominate the landscape, but adding new residential and business-centered blocks on existing tracks of publicly-owned land. Danny Peterson/The Portland Observer

Former Portland Parks Bureau Director Zari Santner and former Urban League of Portland director Michael Alexander are the visionaries behind the idea. They have been friends for over 10 years and worked together when Alexander served as a Parks board member. Now retired, they helped form the Albina Vision organization as civilians. The group’s aim is to have a community driven plan that determines the future development of the Rose Quarter area for the next 50 to 60 years.

Albina Vision has created renderings of what the Rose Quarter development could look like. The supporters hope to bring the area back to a more neighborhood-friendly place that can house community gathering spaces, affordable housing, and local businesses.

A new waterfront park could resemble Tom McCall Waterfront Park, located across the Willamette River from the Rose Quarter.

Though the current renderings of the area are only ideas, Santner and Alexander said they’ve been met with a lot of support from community members and have so far gotten the ear of Mayor Ted Wheeler and the city council.

Before urban renewal and the neighborhood razing actions of the 1960s and 1970s, the Rose Quarter was home to residences, shops, and community gathering spaces. It was the historical neighborhood for African American residents and immigrants.

Santner said the intent of Albina Vision is to resurrect a fully functioning neighborhood again so that North and Northeast Broadway Avenue once again can become “the spine of the community, rather than a division between it.”

The name “Albina” comes from the town that once legally comprised most of inner north and northeast Portland in the late 19th and early 20th century before it was annexed by the city of Portland. The black population in Albina exploded after World War II, but subsequent displacement from urban renewal dispersed many of the residents.

The major property owners of the Rose Quarter area are the city of Portland and Portland Public Schools. When you add the several blocks of property the school district owns on the north side of Broadway it comes to a potential 95-acres of property that could be developed in the area.

Santner and Alexander are optimistic that reuse of this public, tax-payer funded property, can be influenced by a community driven initiative like Albina Vision.

“We want to have an entity that will make [the city] listen to the community and do the right thing here,” Santner said.

One possible hurdle that revitalizing the Rose Quarter may face is the widening of Interstate 5, which was approved by Oregon lawmakers earlier this year. The $450 million project would add a lane in each direction and add shoulders in the stretch between I-405 and I-84, smack dab in the middle of the Rose Quarter. That widening of the highway isn’t stopping Santner and Alexander from pursuing their vision, but they said they will need to work around it.

“The discussion right now whether we widen or narrow I-5, we're agnostic on that. We just want it to be capped. I mean, because that gives us the opportunity to have land that allows you to walk right down to the water,” Alexander said.

A redeveloped community would also stem the tide from gentrification that has displaced people from their historical neighborhoods over the past 20years.

Alexander, who used to direct the Urban League of Portland on North Williams Avenue and Russell Street, said he has seen the alterations firsthand since his move here in 2005.

“I mean you almost need a post card of 10 years back to have an understanding around what had been here, even in 2010, let alone 2000, 1990, and those years before. Just radically transformed,” Alexander said.

Alexander grew up in Brooklyn, which stands alongside Portland as another famously gentrified part of the United States. But the changes he saw in his own childhood neighborhood are nothing compared to the “wide scale displacement” that has taken place here, Alexander said.

“We understand the new 'here' is going to be different than the old 'here'. But if it is honoring and embracing and inclusive, then we have an opportunity to now build in a way that unifies rather than divides. And I think that's the promise. We are there to make sure that woven into the DNA of this vision is the acknowledgement that this community needs to be reflected in whatever the rising phoenix is,” Alexander said.