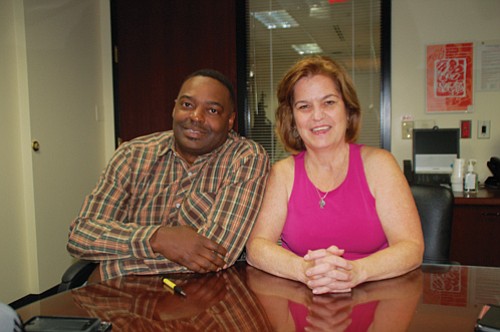 Keith Murphy (right) and Kate Desmond discuss how they are implementing trauma-informed practices at the Multnomah County Department of Community Justice. Murphy, a parole and probationary caseworker for the county, says that the new practices allow him to slow down and be more empathetic with his justice-involved clients. Zachary Senn

A new type of parole and probationary care is being exercised in Multnomah County. Called trauma-informed practices, it seeks to rehabilitate people based on how their personal experiences and brain development have shaped them, with the aim of helping the county reduce its reliance on the jail system.

The Smart Supervision Project is a pilot program that has incorporated trauma-informed practices into the supervision of offenders who are between 15 and 25 years of age. Dr. Alisha Moreland-Capuia, a psychiatrist from Portland’s African American community and who specializes in trauma-informed practices, says that it is necessary to recognize the role trauma plays in people facing the consequences of their behavior.

“If you were to take a look at persons who have been entangled with the law, one consistent thing that you will find is trauma,” Moreland-Capuia told the Portland Observer.

Trauma from long-term stresses, like racism and poverty, can adversely affect the development of the brain, she said, describing people who have experienced significant amounts of trauma as having difficulty accessing their cortex, which is the portion of the brain responsible for checking impulses and controlling reactions.

“Over time, stress that is untreated and unmanaged becomes trauma,” Moreland-Capuia said. “That trauma, when not dealt with, becomes toxic not only to the body physically, but also impacts mental health.”

“What trauma informed practices do is help individuals get out of the bottom part of their brain, and use that top, more critical part of the brain,” Moreland-Capuia said. “That’s where the healing takes place.”

For victims of racism, there can be a long-term fear of discrimination.

“They are under a situation where they’re in toxic stress,” Moreland-Capuia said. “They’re always looking out for their own safety, but they also have to be constantly concerned about what might happen as a consequence of someone else’s racism.”

The basis of trauma-informed care is creating a safe environment in which clinicians and caseworkers can understand the root causes of an individual’s trauma.

Multnomah County’s implementation of trauma-informed practices stems from a grant the county received from the John D. and Catherine T. MacArthur Foundation that was designed to help the county reduce its reliance on the jail system.

Kate Desmond, community justice manager for Multnomah County, says that in every-day practice, trauma-informed care is allowing her caseworkers to empathize more with their clients.

“What I’ve noticed is that we are being much more patient,” Desmond told the Portland Observer.

Keith Murphy, a caseworker for the county and a member of the pilot program, says that for many justice-involved individuals, approaching their caseworkers can be a challenging experience. He added that the use of trauma-informed practices is making it less intimidating, however.

“It’s just a stressful experience coming into our offices at times,” Murphy said. “With trauma-informed practices, there’s a better rapport.”

“Your brain develops a certain way, and that starts in-utero,” Murphy said. “We’re going under the hood, so to speak.”

Desmond added that this enhanced understanding is helping the county reduce its use of the jail system, and use a more thoughtful approach to punishment for those who run afoul of the law.

Desmond said that house-arrest, GPS monitoring and community service are all viable alternatives to a stint in jail.

“You just can’t arrest away your social problems,” Murphy added.

Moreland-Capuia expects that addressing trauma will help to reduce recidivism rates, and focus the county’s efforts on transitioning offenders permanently out of the criminal justice system.

“Helping to manage trauma is going to be key in helping people move along their path to healing,” she said. “Getting better, and staying better.”