Changes due after report finds police use too much force 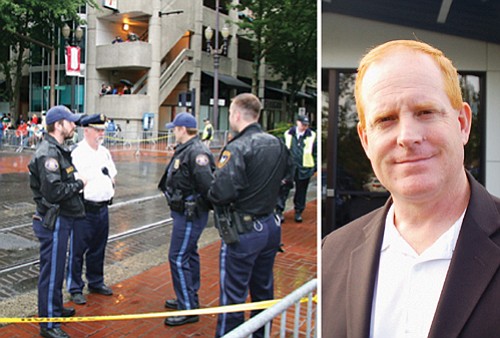 Captain Bob Day, right, oversees Portland Police Bureau training. He supports the findings of a new report finding officers need better de-escalation training to avoid conflicts, but says he also has to figure out a way to add the training to a curriculum that is already packed into a 40-hour schedule each year.

Some insiders within the Portland Police Bureau and social justice advocates outside of it are hopeful for progress in officer training that will put a greater emphasis on de-escalating conflicts between police and the public, while others are cautious about empty promises.

A group of national consultants recently found that the Portland Police Bureau is not training its officers enough in de-escalation techniques as an alternative to force, especially as it studies deadly force and investigates potential conflicts between police and the mentally ill and people of color.

The consultants wrote in early October that Portland Police training needed to put “greater emphasis to building verbal communication and de-escalation skills.” To date, however, insufficient training time and a lack of quality instruction has been devoted to these important behaviors, the report said.

By observing three of Portland’s annual police training cycles, the consultants noted how in many instances police were often escalating tensions rather than defusing them. Some of the examples involved officers trying to get suspects to follow commands by lacing verbal orders with profanity and a raised voice. While officers recorded these interactions as ‘non-force” techniques, the consultants said they were the opposite.

The report said de-escalation techniques are those that are used to calm an agitated subject, promote rational decision making, and gain non-fear based, voluntary compliance.

“There appears to be a large-scale confusion regarding the intent of de-escalation with the bureau and the confusion has yet to be adequately rectified through training and the evaluation of force events,” the consultants wrote.

Portland civil rights organizer Jo Ann Hardesty, who has been working with police to incorporate community relations into training, told the Portland Observer that the idea of stronger de-escalation training would be “one small step in the right direction.”

Some parts of the report praised Portland Police’s progress in best practices, such as local officers conducting meetings with mental health service partners to gather input from them on how to deliver services. The consultants wrote that they “have been continuously impressed by the collaborative and respectful nature of the meetings.”

The consultants’ report comes as a requirement of a 2014 settlement agreement between the city of Portland and the U.S. Department of Justice after a 2012 investigation found that police were using too much force against people with mental illnesses.

High profile cases like the police shooting death of James Chasse, who had a mental illness, and other officer-involved shootings, served as a catalyst for the investigation.

After the death of Aaron Campbell, a suicidal black man who was unarmed when he was shot by police outside his northeast Portland apartment in 2010, national civil rights leader Jesse Jackson came to Portland and called for the Department of Justice’s intervention.

The city hired Rosenbaum & Associates, a Chicago firm recognized as experts in assessing police behavior and best practices, to help it improve its practices and comply with the settlement terms to reduce crisis encounters between persons with a mental illness and police.

The report found that Portland police were often confused about the difference between what’s called de-escalation and force-mitigation techniques.

De-escalation can involve using calm and empathic communication before resorting to force, whereas force-mitigation can rely on commands and warnings as a first resort to stop a conflict from escalating.

Many Portland police were found to be using force-migration techniques when de-escalation would be more appropriate, the report found.

Portland police say they want to incorporate the consultants’ recommendations into their training.

Portland Police Captain Bob Day, who was appointed in July 2016 as the new head of training at the Police Bureau, says he understands the consultants’ call for better de-escalation training and is “very supportive of that,” but told the Portland Observer that the desired instruction presents some obstacles.

There are only 40 hours per year allotted to officer refresher training courses and many of the core classes, like traffic training, domestic violence response, etc. are too important to cut out, Day explained.

“You know, at the end of the day, it just becomes a capacity issue. Organizationally, we are going to have to reflect and prioritize,” Day said.

Day said he does not have a dedicated, formal de-escalation class, but now plans to integrate the consultant’s recommendations on de-escalation “as a thread” throughout the police training curriculum.

Dan Handelman, a member of civil rights group Portland Copwatch, told the Portland Observer he believes de-escalation should be given a dedicated class, in light of the recent report.

He cautions that Portland Police have made reform promises in the past, but haven’t always followed through on them.

“The city had a plan to eliminate racial profiling in 2009,” Handleman pointed out. “Here it is in 2017 and there’s still racial profiling in the city. We can’t keep waiting for them to fix these things when the community is being mistreated,” Handelman said.

According to an independent police report, 2016 marked a peak of community complaints about use of force by Portland Police. There were 143 use-of-force instances which is higher than each of the last five years.

At least six police shootings in Portland since 2012 were at individuals thought to be experiencing a mental illness. Though officer-involved shootings overall dropped from six in 2015 to two in 2016, conduct and force complaints have increased substantially in the same period.