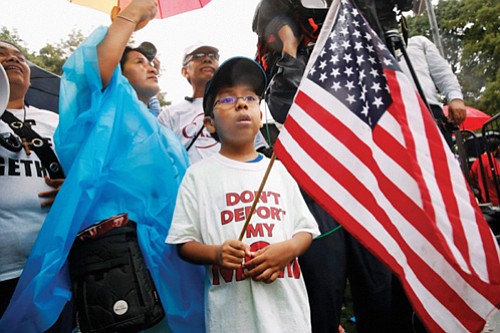 A rally in favor of immigration reform at the White House in Washington, D.C. brings out Michael Claros, 8, of Silver Spring, Md., whose parents would have been eligible for DAPA, or Deferred Action for Parents of Americans, an Obama era policy memo that the Trump administration has since formally revoked. (AP Photo)

A wide range of civil rights groups condemned the Trump Administration Tuesday for ending the 2012 program that has deferred deportations for more than 780,000 people who came to the U.S. illegally as children.

Opposition to the move was furious after Trump officials announced they will rescind the Deferred Action for Childhood Arrivals (DACA) program and phase it out over the next six months, leaving the fate of the so-called Dreamers impacted by the program in the hands of Congress. The decision could impact 11,000 children in Oregon.

“Today, President Trump made one of the cruelest and most racially-motivated decisions in modern American history,” said Derrick Johnson, national interim president of the NAACP. “The current administration has abdicated any moral authority associated with the United States in favor of policies designed to promote white supremacy, shrink our democracy and divide our nation. It’s simply un-American.”

David Rogers, executive director of the American Civil Liberties Union of Oregon, said Trump and the forces that helped to end DACA, “threw the lives and future of Dreamer families into disarray, and injected chaos and uncertainly into thousands of workplaces and communities across America.”

Rogers said the DACA program served as a critical lifeline for young immigrants who came to America as children and have known the United States as their only home. He said the Oregon ACLU will continue to fight on behalf of their futures.

Ivan Espinoza-Madrigal, executive director of the Lawyers’ Committee for Civil Rights and Economic Justice, said deporting dreamers would send them back to countries which they have little or no connection and subject them in many cases to the intense violence or poverty present in some of those countries.”

“This latest Trump threat only further divides our country and creates fear in our communities,” said Jason Leon, chair of the Latino Caucus of the Democratic Party of Oregon.

“It goes against our American values and further divides our nation,” Wyden said. “I will be fighting tooth and nail alongside my Senate colleagues to preserve the ability of these young people to continue to contribute to our country. Congress must come together and work on comprehensive immigration reform and a fair path forward for Dreamers.”

Attorney General Jeff Sessions outlined Trump’s decision Tuesday at a press conference at the Justice Department, arguing that the program, created by President Obama, was unconstitutional and was an executive branch overreach.

The acting secretary of the Department of Homeland Security, Elaine Duke, issued a memorandum later the same day formally rescinding DACA and phasing it out.

DHS is providing a six-month window in which it will adjudicate pending requests and will give Congress a chance to pass a legislative alternative. As a result, the program will end at different times for different people, expiring on a rolling basis.