An Awakening of What You’ve Been Missing

Plays worth the journey to Oregon Shakespeare Festival 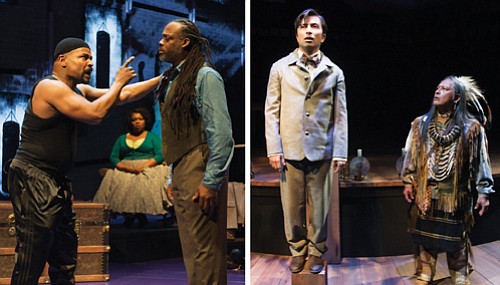 Kevin Kenerly (left) and Steven Sapp are a boxer and poet with a shared past in “UniSon,” derived from the great African American Playwright August Wilson; And placed in an Indian school (right photo) where his culture is erased, a 19th Century Native American (Shaun Taylor-Corbett) is visited by the spirit of his Native American grandfather (Brent Florendo) in ‘Off the Rails.’ Both shows are now playing at the Oregon Shakespeare Festival in Ashland. Jenny Graham, Oregon Shakespeare Festival

To my mind, the best theater experiences awaken a sense of what you have been missing -- by telling a story you had not thought to wonder about -- or one neglected in the theater world, or by speaking in a theatrical or musical language whose potential is yet untapped. Several shows are still playing at the Oregon Shakespeare Festival that offer just such opportunities to experience theater in fresh ways.

UniSon: The great August Wilson well deserves the recognition he has received from the dominant culture, but likely would not be pleased to find that some of the theaters which now produce his plays from time to time produce few or no other playwrights of color. I adore Wilson's work, but feel certain that such tokenism would have roiled him; he was all about honoring the distinctness of neglected voices. I experienced "UniSon" as a canny rejoinder to that trend; this new play is August Wilson as we have never seen him. Its creators have used access to Wilson's unpublished poetry to mount something distinct: a highly intuitive exorcism of the demons and depths of one African American man, and a meditation on living and dying.

In many ways, I feel unqualified to describe what is happening here; this production so clearly springs from African American experience, and speaks in a theatrical language outside the dominant one we are used to seeing on stage. I felt it calling forth different faculties, urging me to let go of diagnosing what was happening and just let the music and poetry wash over me. I found myself asking why I wanted to know which words came from Wilson and which didn't, which experiences were based on "fact" and which weren't. I also found myself questioning my attachment to conventional storytelling. This work feels somehow less angular, more fluid.

Its creators, the theatrical group Universes, have a track record of working from a place of clarity. Their work includes "Party People," a rousing tribute to the Black Panthers and the Young Lords which was created for OSF and eventually moved to the Public Theater in New York last fall. As with that work, "UniSon" revels in music and movement, and lives inside a world in which all words feel like song lyrics, whether or not they are sung. Here the action revolves around a successful writer who bequeaths his possessions to a young protégée with instructions not to open a particular trunk; she cannot resist, and then finds herself on a journey through unknown dark reaches of her mentor's psyche. I recommend entering this world ready to feel the music and poetry in your body. Keep it visceral; these artists are showing the way.

Off the Rails: For the first time ever (and long overdue), OSF is producing the work of a Native American playwright. This world premiere of Randy Reinholz's play loosely but recognizably adapts Shakespeare's "Measure for Measure" to tell the story of Pawnee tribal members' experience of 19th century life in and around the Indian schools which were so instrumental to the genocide of Native cultures. At times the fit with Shakespeare feels uncannily apt, particularly in terms of Momaday and Isabel, the siblings at the heart of the play. Momaday's death sentence for impregnating his Irish sweetheart (whom he has married in the Pawnee way) feels suitably arbitrary; at the time depicted, Irish were outcasts and mostly not recognized as white, so this enlistment of the justification of white supremacy feels appropriately sinister. And Isabel's location at a cross-section of conversion to Christianity and pride in her Pawnee heritage feels poignant and ripe for exploitation in the way Shakespeare's plot demands. At other times, however, the connection to "Measure for Measure" seems to constrain the more significant stories that beg to be told; I wanted to see, for example, more exploration of the Indian schools than this treatment allows.