Field widens after Saltzman decides not to seek re-election 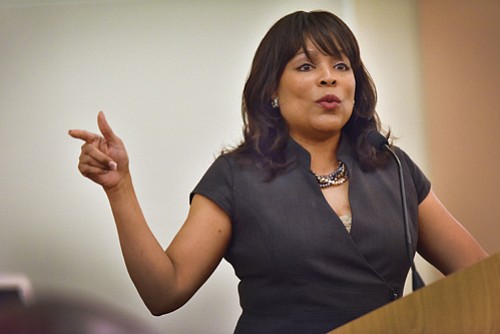 Multnomah County Commissioner Loretta Smith has thrown her name into a May election for Portland City Council seeking a position that will become vacant when Dan Saltzman steps down at the end of his term next year.

Smith announced her intentions last week after weeks of speculation about her future. Term limits prevents her from running for re-election as a county commissioner. Her new candidacy came after Saltzman announced he would not seek another term after more than two decades in office.

Smith has been in public service for her entire professional life, first serving with U.S. Sen. Ron Wyden for 21 years, and then as a Multnomah County Commissioner for the past seven years.

She has built her credentials in government by advocating for disadvantaged populations and other people left behind, such as creating jobs for young people of color, educating seniors about scams, and fighting the opioid epidemic.

“The opportunity to continue to fight for the most vulnerable on the Portland City Council would be an honor and a privilege,” Smith said in a news release announcing her candidacy. “Our next leaders need to build a shared vision for Portland’s future and ensure it remains affordable for working people, stand up for progressive values, and provide every community a meaningful voice in City Hall.”

Smith will be the second person from the African American community to run for Saltzman’s post. JoAnn Hardesty, the president of the Portland NAACP and a former state representative from Portland announced her candidacy earlier and even challenged Saltzman to step down to open the seat up for new leadership.

On Monday, a third candidate, Felicia Williams, also announced her plans to run for the office.

Williams is a community organizer and historian who has researched and tackled issues of gentrification impacting Portland’s black community. Her day job is managing a biotech company. She is also an Air Force veteran and serves as president of the Downtown Neighborhood Association.

This story has been updated.