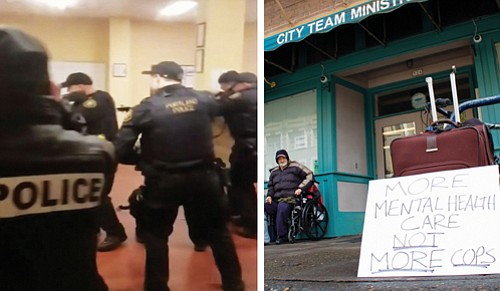 Cell phone video (left) from a bystander identified as Morgan Pickering and uploaded to Instagram captures police officers aiming their weapons at a man wielding a knife inside the City Team Ministries building in southeast Portland Saturday night. The sign “More Mental Care Not More Cops” (right) was posted by activists during a vigil Sunday night and remained in front of the shelter on Monday.

A deadly police shooting of a 48-year-old man wielding a knife that occurred Saturday night at a homeless shelter holding an Alcoholics Anonymous meeting sent shockwaves through the community.

Eyewitness saw a white man burst into the 12-step meeting at the City Team Ministries shelter at 526 S.E. Grand Ave., an organization that serves the homeless, without a shirt on and wielding a knife before getting shot and killed by police. One of the witnesses captured video from his cell phone of a group of about a dozen police entering the facility, and then shooting the man in the span of about a minute. The footage was posted on Instagram.

Multiple witnesses said he was waving the knife around and cutting himself prior to being shot.

“It was horrific,” the videographer, Morgan Pickering, told reporters. “We were all scared for our lives.”

Police said that at 7:30 p.m. Saturday they were responding to a reported stolen vehicle crash about a block away when a man jumped out of a moving vehicle and fled on foot. He was confronted shortly later after entering the shelter.

Witnesses said police ordered him to drop his knife, but he refused, so they shot him.

The man was identified by police and family members as John Andrew Elifritz, a 48-year old shipyard worker with a young daughter. Posts on social media from the mother of Elifritz’s child and close friends indicated he had been experiencing a mental health crisis the week leading up to the incident.

Police said Elifritz called 9-11 earlier Saturday to report his family was murdered, which wasn’t true, and an officer found him on Southeast 86th Avenue where he drew a knife, held it up to his throat, and then backed away.

The police officer let him run-away in order to “de-escalate” the situation and referred the incident to the Bureau’s Behavioral Health Unit for follow up, authorities said. Not long after, Elifritz is accused of stealing a car by force from a woman after another carjacking attempt went astray.

Multiple witnesses at the City Team shelter said the police were justified in their use of force on the man, who they said was acting erratically. Other bystanders and community members said the opposite.

The incident sparked backlash among civil rights advocates, including the group PDX Resistance, who criticized the police’s actions on social media, and from the American Civil Liberties Union of Oregon.

"Was there any attempt to de-escalate the situation before officers open fire inside the homeless shelter full of innocent bystanders? If not, why not?" wrote ACLU of Oregon Executive Director David Rodgers. "We join many in the community by calling for a prompt, thorough, and transparent investigation into this shooting. The public deserves to get a detailed account of why this man was shot and what actions Portland Police took to avoid yet another fatal shooting."

The officers involved in the shooting were identified Tuesday. Interviews with the police involved were underway, authorities said.

City Team shelter Executive Director Mike Giering told the Portland Observer that they are “fully cooperating” with police on the investigation.