Voices from the Riots 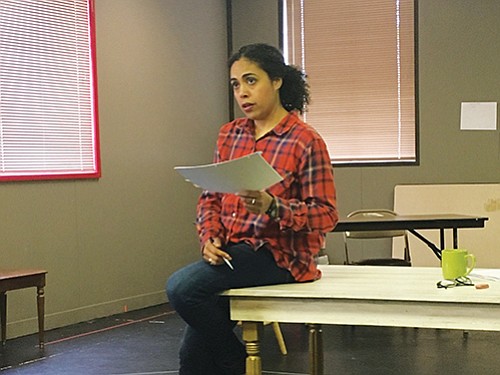 Portland actress Chantal DeGroat rehearses her role in “Twilight: Los Angeles, 1992,” the pioneering theater production recounting personal accounts from people connected to the riots that broke out after the acquittal of four police officers charged with using excessive force in the arrest and beating of Rodney King. Shows for three nights only, Sunday through Tuesday, April 15-17 at 7:30 p.m. on the Alder Stage at the Artists Rep Theatre, downtown. Photo by Dana Lynn Barbar

“Twilight: Los Angeles, 1992,” a pioneering storytelling theater production giving voice to the people directly impacted or involved in the riots that followed the acquittal of four police officers in the beating of Rodney King is recreated in Portland after it rocked Broadway nearly 25 years ago. Today the play carries new relevancy with the national conversation once again on police brutality and the many protests against it.

Portland’s Profile Theater is featuring the work as part of its current season focus on only female and person-of-color playwrights, part of a three year diversity initiative. The production will also star Portland favorite Chantal DeGroat, who will transform herself into dozens of real-life witnesses to the unrest that rocked L.A. and the country to its core.

“Twilight: Los Angeles” was written by Anna Deveare Smith, an African American actress, writer and educator who has dedicated her career to exploring the intersection of art and social justice.

In 1994, Smith performed the lead role, a groundbreaking form of storytelling theater. She interviewed over 200 people connected with the 1992 riots, speaking with people from the African American community, the Korean American community, law enforcement and politicians, among others. She turned their interviews into a script and performed them as a one-woman show, offering a 360-degree view of the occurrence and unrest.


Profile Theatre presents the play for three nights only, Sunday through Tuesday, April 15-17 on the Alder Stage at the Artists Rep Theatre, downtown.

DeGroat, the Portland actress known for her role in the TV series Grimm, will play over 35 interviewees who were involved or impacted by the unrest. The production is directed by Josh Hecht, Profile Theatre’s artistic director.

Showing the production in Portland was a conscious choice for Hecht, who moved to Portland recently and noticed a unique juxtaposition of social progressiveness and racial inequities ingrained into the history of the city.

“The Rodney King incident is this huge touchstone that rocked the whole country, but it’s just one piece of this story that precedes the founding of this country and continues right on to today, including in Portland,” Hecht told the Portland Observer.

He notes that part of the reason that this piece was so moving when it was first performed is due to the acknowledgement of humanity in every person portrayed.

DeGroat agreed, and added that the play continues to educate audiences today.

“The author is showing us a way to frame what’s going on, and gives us examples of the myriad perspectives that surround an issue. One of the most important things that this piece does for people today is help open their minds much further than they thought it could go, so they can learn and listen more,” she said.

The play features a vastly diverse group of people around this one incident, and they all get a chance to express their stories and have their perspectives heard.

“The way this show is presented helps us learn so much about how to look at a situation. It reminds me that we can both speak and listen. We can have both, and that’s refreshing,” DeGroat said.

Tickets and more information can be found at profiletheatre.org.