A good season ends with a crash 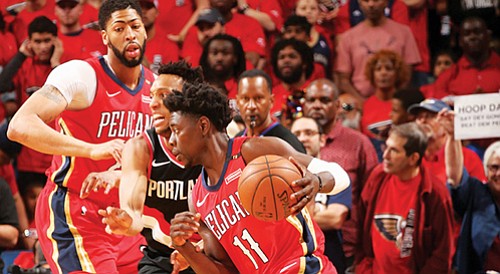 New Orleans’ Jrue Holiday and his Pelican teammates stop Portland in the NBA playoffs with Saturday’s 131-123 victory and a 4-0 sweep in the opening round. (AP photo)

The Portland Trail Blazers head into the offseason with plenty of questions, with speculation that big changes could be ahead. Minutes after the Blazers were eliminated by the New Orleans Pelicans with a 131-123 win on Saturday and a 4-0 sweep in the opening round of the NBA playoffs, Blazers coach Terry Stotts was already addressing how Portland gets better going forward.

Stotts said he has confidence that Portland President of Basketball Operations Neil Olshey will keep the team pointed in the right direction.

"It's tough to evaluate after a playoff loss," Stotts said. "We had a good regular season. We did a lot of positive things in the regular season, but ultimately you're defined by the postseason. I think it's still a little early right now to say what direction we're going to go and what needs to be done moving forward, but one thing is that Neil is really good."

Portland made it to the playoffs for the fifth straight year after finishing the season 49-33 and winning the Northwest Division title for the seventh time in franchise history.

The Blazers were boosted by a 13-game winning streak that started with a victory over the Golden State Warriors just before the All-Star break, and secured the third seed in the Western Conference. The team's streak matched the franchise record.

Damian Lillard drove the team's success during that span. In March he averaged 27.9 points, 4.6 rebounds and 6.5 assists. He also set a franchise record by making 64 straight free throws. He was named the West's player of the week twice.

But New Orleans was able to contain him in the playoffs. He averaged 18.5 points during the series, after scoring 26.9 per game during the regular season.

The Blazers have lost 10 straight playoff games. They were understandably stunned when the Pelicans took the first two games at the Moda Center. While they fought in Game 4, it was too late. New Orleans had the momentum.

No sixth seed had ever swept a No. 3 in a best-of-seven series.