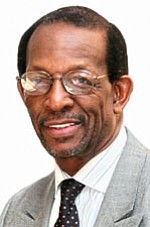 It is critically important that all people of conscience and goodwill continue to condemn the horrifying, uncivilized policy of separating children from parents from Mexico and Central America entering this country seeking asylum or a better life for their families.

While some might debate the “legality” of people crossing the border without documents, absolutely nothing justifies treating human beings inhumanely. Therefore, African Americans and people of African descent must maintain a principled position of fighting against family separation and for humane treatment of all persons entering this country for whatever reason.

Justice demands that there also be a focus on the “color” of immigration policy reform.

African Americans and people of African descent are increasingly taking note that there is virtually no attention paid to the fact that Haitians seeking entry into the U.S. are often sent to detention centers where they languish for months. And, when DACA is front and center in the policy debate between Trump and Congress, the face of the “Dreamers” is seen as Brown (Latino) not Black (people of African descent). This is despite the fact that there are untold thousands of Black Dreamers from Africa, the Caribbean, Central and South America in this country. The plight/condition of Black immigrants deserves attention, and it is fair to ask our allies to deliberately and intentionally make this point. To do otherwise risks breeding hostility and resentment among people of color nationalities/ethnicities who should be united in their quest for just immigration policy reform.

Finally, lost in the essential struggle to prevent separation of families is the fact that every major piece of legislation advanced by Trump and the Republicans to address the plight of the Dreamers and the need for comprehensive immigration reform eliminates the “Visa Lottery” Program — better known to African American advocates as the “Diversity Visa Program.”

For years this program has been the primary gateway for immigrants from Africa and the Caribbean, people of African descent/ Black people, to gain entry to this country. Though the quotas have been relatively small, to sacrifice this program is to eliminate a crucial pathway to entry and citizenship for Black immigrants.

Immigrants of African descent are potentially new warriors in the struggle for righteous Black empowerment in the U.S. and the Pan African World. Therefore, the New York based Pan African Unity Dialogue has persistently advocated for a dramatic expansion of the Diversity Visa Program as a cornerstone of its demand for non-discriminatory, just, equitable and inclusive immigration reform, consistent with the legitimate interests and aspirations of people of African descent in this country!

The “Color” of Immigration Policy Reform must include Black people! Dr. Ron Daniels is president of the Institute of the Black World 21st Century and Distinguished Lecturer Emeritus, York College City University of New York.