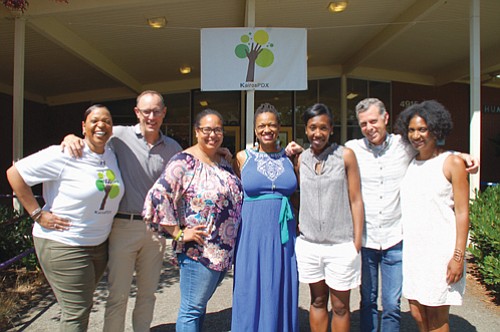 Board members and founders of KairosPDX, a public charter school serving children in the African American community, are disappointed with an offer of a one year lease for the former Humboldt school property at 4915 N. Gantenbein Ave. Pictured (from left) are KairosPDX board members Tiffani Penson and Chris Nelson; school founders Zalika Gardner, Marsha Williams and Kali Thorne-Ladd; and board members Stuart Ellis and Traci Rossi. Photo by Danny Peterson

Even as doors opened Monday at KairosPDX, a public charter school serving children in the African American community, a school that will see its first graduating class of fifth graders this new school year, uncertainty for the school’s future lingers.

That’s because for the second time in less than a year, the school which is tasked with closing the achievement gap for minority students by using evidence-based methods of increased learning outcomes, and is led by a volunteer, minority-led board, has been offered just a one year lease by the Portland School District, owners of the property.

KairosPDX wanted a five year lease, but the district offered only one year, plus a rent increase of over 30 percent, according to KairosPDX school board members.

Portland Public Schools cited a district-wide shortage of facilities as the reason for the shorter lease, though no plans are in place specifically for the former Humboldt Elementary School, whose doors were shuttered when Kairos moved in.

Tiffani Penson, who is the vice chair of KairosPDX’s board of directors, told the Portland Observer that she’s disappointed in the school district’s decision.

“I understand that there is resistance to charters, but when you are failing to serve an entire demographic of children; you lose the right to have an ideological argument. You need to focus on what works and support that,” she said.

KairosPDX is one of the schools trying to turn that statistic around, one student at a time, Penson said.

“Kairos creates a program to change things and improve outcomes. And we are doing this. While our sample size is low, the early results are very promising. In some cases, black students at Kairos are outperforming black students at other schools in the districts over four to one,” she said.

Part of how they achieved the positive results was by hiring high quality educators and holding classes year-round, both proven techniques of improving learning outcomes. The school also creates culturally specific curricula.

Meanwhile, the threat of being forced to move to another location seriously throws into question whether the school can remain open.

The school asked for a five year lease from the district back in December, and in late June, the district responded with its own offer of a one year lease, as well as a rent increase of over 30 percent, KairosPDX board member Chris Nelson testified to the school board last month.

As a compromise, KairosPDX is now asking for a two year lease.

Penson said the school has looked at ‘dozens’ of properties in the Albina area in the past year, and even hired a facilities person to help them do so back in 2016, but none of the locations met the criteria to hold their more than 160 students.

“We are fully committed to giving the district their building back and our own space. The only thing we’re asking for is time. Our roots in this community are essential and we want to stay here. We are trying our best to be fair and reasonable; we have tried our best to partner, I’m left with the conclusion that the district just doesn’t care about our kids.”

KairosPDX offered to partner with Portland Public Schools earlier this year to help train teachers to be equity-focused, which the district did not respond to, Penson said.

The school previously received a grant to train district teachers, which they did, to high evaluations, in its first year of operation.

Penson added that the main mission the four founders of the school committed to when they started it was to close the achievement gap for underserved, minority students.

“We're on track. We're making good on ours. So now it feels like PPS gets to toot that horn. We're an asset. And so that's why I'm really confused,” she said.

Upon reaching out to the district, Portland Public Schools cited a deficit of facilities district-wide, as well as the subsequent obligation to provide that space to students at other schools all over Portland, as the main reason for their offering.

“PPS appreciates the important work Kairos does as a charter school for our community in educating students who historically have been underserved. We look forward to finalizing a new one-year lease agreement in support of this work as our district works to address a significant shortage of space to serve all of the students in our district,” a message from the district reads.

Then-school board chair Julia Brim-Edwards echoed a similar sentiment following testimony from KairosPDX spokespersons, including Penson, at a school board meeting last month.

“We don't have extra space and charter schools have an obligation to find their own facility and we believe that offering a one year lease is a very fair thing to do and are willing to enter into it. But we also have....our board has a fiduciary responsibility to PPS students and we have a severe facilities need and we've tried to offer a lease with terms that are both fair to Kairos but also fair to the rest of the students at PPS,” Brim-Edwards said.

KairosPDX staff will next testify to the school board on Tuesday, Aug. 28.