Hardesty Focused on the Issues 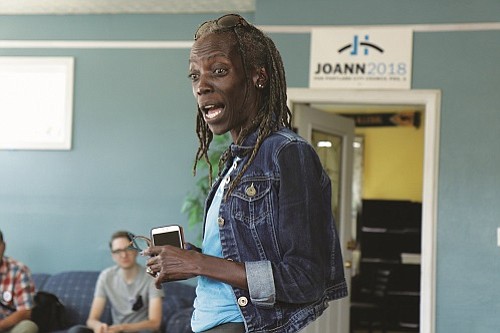 Jo Ann Hardesty, the front-runner for a seat on Portland City Council, briefs her campaign staff on Saturday before they head out for door-to-door canvassing from her campaign headquarters at the Filipino American Association at 8917 S.E. Stark St. Photo by Danny Peterson

On the issue of housing and homelessness, Hardesty advocates for hiring homeless people at minimum wage to clean up garbage in the city and provide hot meals and showers to other homeless people through “mobile units.” The cost would be just 10 percent of what the city currently spends on their handling of homeless people using police, Hardesty said, and was inspired by similar programs that have taken place in other cities.

She called the current state of Portland’s law enforcement record involving homeless people “inhumane,” citing a recent report that stated over half of all arrests by city police last year were of homeless people.

Hardesty is calling for sweeping changes in Portland’s law enforcement policies in light of officer-involved fatal shootings of people with mental illnesses in recent years, including using firefighters as responders to those experiencing a mental health emergency.

“The police are way out of their lane,” she said. “'I don't know about you, but when I see firefighters running up the step, help is on its way. And they have never killed one person because they didn't do what they told them to do.”

She also criticized police’s profiling of African Americans through the guise of gang enforcement, as was recently revealed to have occurred in an independent police review by the disproportionate number of traffic stops they performed, which resulted in few gang-members being apprehended, Hardesty said.

“I think it's the community's responsibility to decide how they want to be policed and it is the police department's job to be responsive to communities' needs. And I look forward to working with Chief Outlaw to fundamentally change how we do policing in the city of Portland,” she added.

Hardesty also derided police crowd control tactics used earlier this month during a right-wing and counter left-wing counter-demonstration, downtown, in which flash-bang grenades were used to subdue counter-demonstrators and injured some of them. She suggested removing “war weapons,” from police such as the offending flash-bang grenades, which were temporarily suspended by police from their arsenal, after the recent protest.

A top-to-bottom audit of the police department, pulling out of a federal law enforcement partnership, and providing more funding for 9-11 responders are also on her agenda. She said she also wants to re-train 9-11 responders so that they can differentiate between “a real crime in progress and houseless people who are an inconvenience in [the caller’s] neighborhood.”

On the matter of preventative mental health care, Hardesty said she’d like to work with state and county agencies to increase the number of mental health providers “so that people have choices available in their local community.”

Hardesty said she was inspired to run for the City Council back in 2016 during a public protest over police union contract negotiations under then-Mayor Charlie Hales. She and the other demonstrators were barricaded from City Hall by riot police. Hardesty eventually made her way inside, but said she discovered later that if just one city council member had opposed the barricade, it could have been dissolved. That’s when she knew she had to run, she said.

“I went to Dan [Saltzman] and looked him in his eye and said 'Dan, you've been here too long and I'm going to run against you.'”

Building coalitions of people to back a cause is the basis of Hardesty’s political experience and foundation to her current campaign. Besides leading the Portland NAACP, she was executive director of the nonprofit Oregon Action and currently serves on the executive committee of the Albina Ministerial Alliance, and as a board member of the NARAL Pro-Choice Political Action Committee and the housing non-profit Human Solutions, among several other advocate organizations.

Though she did not raise the most money of all the candidates in a crowded primary, she did have the largest number of individual donors, over 1,200, who contributed “from $5 to $5,000” with the largest being from her ex-mother-in-law, Hardesty said. She scored a dramatic 20-point victory over Smith, her closest opponent.

When asked how she would toe the line between being a public official and an activist, Hardesty responded that her activism background helped inform her time as a state legislator, and expects the same this time around, too.

“I don't think an activist and policymaker are mutually exclusive. I think you can be both.”

When asked whether anything about her campaign or herself could’ve been improved, she responded: “Sometimes I probably don't take time to not provide an answer that doesn't sound flip. For example, I got in trouble earlier on because I called some people idiots because they thought that using a jail for houseless people was a good approach,” Hardesty said, referencing her disagreement with her opponent, Loretta Smith, who said she supported re-purposing the unused Wapato Jail in north Portland as a homeless shelter.

In the historic election that will seat Portland’s first black female city council member, I asked Hardesty her thoughts on being a role model for others.

“I hope somebody sees a working class person could have a campaign that was people-focused and have people give them money and support them, not because they were rich, connected, special in any way, just someone who did the hard work of doing the things that the community needed done. And so if I'm going to be a role model, I hope that's the role model. But I don't want anybody to think that I think I'm perfect, 'cause I am very flawed.”