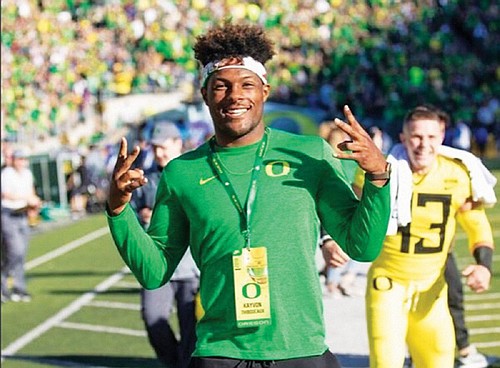 Kayvon Thibodeaux of southern California has picked the University of Oregon Ducks to play football next year. He is the top overall college football prospect in the country as rated by ESPN.

The 6-foot-5, 234-pound Thibodeaux, made his commitment to the Ducks last week on the first day of the early signing period.

Thibodeaux was recently named All-USA Defensive Player of the Year by USA Today. He chose Oregon over Alabama, Florida and Florida State.

Thibodeaux was part of a defense at Oaks Christian High School in Westlake Village, Calif., that had three straight shutouts and held 11 of 13 opponents under 15 points.

In all, Oregon got early commitments from 21 prospects. The class is considered among the top five in the nation.