A Lens to the World

Immersed into an array of cultures at PIFF 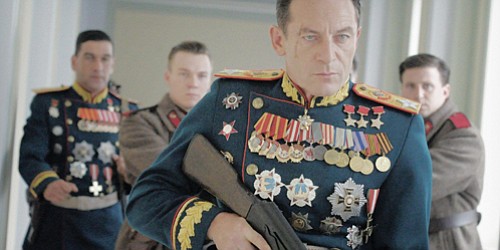 The two-week Portland International Film Festival opens Thursday, Feb. 15 with two showings of ‘The Death of Stalin,’ a satiric depiction of the frantic power struggle that ensued when Soviet dictator Joseph Stalin died. The opening night screenings will be held at the Portland Art Museum and Regal Fox Tower.

My favorite time of year is about to begin! Two weeks of world cinema will be scattered all over the city as the Portland International Film Festival begins Thursday, Feb. 15 and continues until March 1. It's a refreshing change from the overly art-directed recycled stories that dominate so much Hollywood fare, and a chance to see stories from all over the world and dip into an array of cultures. 57 countries are represented in 90 feature-length films and a variety of short films as well.

The opening night film, playing in two venues, is "The Death of Stalin," from the United Kingdom. Written and directed by Armando Iannucci, who also wrote and directed the hilarious "In the Loop," the film is a satiric depiction of the frantic power struggle that ensued when Joseph Stalin dropped dead. Like "In the Loop," it promises a fiercely funny, rapid-fire takedown of bureaucratic dysfunction.

From then on, each weekday evening and full weekend days until March 1 offer a dazzling array of options. Among them:

"Hochelaga, Land of Souls" is my early favorite; it was Canada's

The history of Native American peoples are unearthed from a long-vanished Canadian village and a reverence for ancestors and of connectedness across generations comes to life in Francois Girard's ‘Hochelaga, Land of Souls,’ one of the dramas coming Monday, Feb. 19 and Wednesday, Feb. 21 to the Portland International Film Festival.

submission for the Academy Awards, and should have but didn't secure a nomination for best foreign language film. It's a complex and moving exploration of the various generations of people who have lived in the land that we now know as Montreal, but centers the perspectives of indigenous people in a way that we basically never see on film. The first scenes are set in 1267 after a battle decimates an Iroquois community and a shaman intones prayers over the lost warriors. The film returns often to those prayers, which set the tone for a view of the land itself and of successive generations that resets our perspective on whose influence on North American land runs deepest.

The film's central story involves a present-day archaeological dig headed by a graduate student of Mohawk descent, moving back to various periods of Quebec history reflected in the findings of the dig. At each historical moment, indigenous perspectives are honored and, in most, are prominent and even central, and the film constructs a sense of reverence for ancestors and of connectedness across various generations and cultures that I can't recall ever seeing attempted in a studio release. All of the 300 indigenous characters and extras are played by indigenous people, and the film paves a way to disconnect from centering white/European perspectives and to respect our connections to prior generations that moved me deeply. It plays on Feb. 19 and 21 and is worth prioritizing, since a U.S. release may not happen; critics appear to miss its significance beyond its depiction of Canadian history.

"Lean on Pete" is a British production that tells an American story set and shot in Oregon. It centers on Charlie, a gentle 15-year-old boy living an increasingly precarious existence. He lives on the edge of poverty with his father, whom he loves but who offers him little in the way of guidance, safety, or even emotional and physical sustenance. Charlie takes a job working for a man who races horses and develops a bond with a horse named Lean on Pete; a natural at working with horses, Charlie's work leads him to a dawning recognition of the harshness of the horse-racing world just as his own world crumbles. Anchored by the remarkable performance of Charlie Plummer as Charlie, the film is a perceptive depiction of the American underclass, revealing with compassionate but clear eyes the little lies that adults tell themselves in order to avoid looking at their vulnerability and culpability. Watching Charlie's vulnerability made me weep for all the children who somehow manage to survive unthinkable odds while suffering right in plain sight. The film plays on Wednesday, Feb. 28.