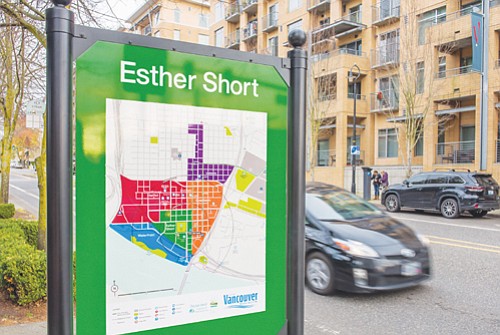 A large kiosk at Esther Short Park in downtown Vancouver marks the first batch of new transportation signs being installed with the New Year to improve navigation for pedestrians and others.

Visitors to downtown Vancouver are being greeted in the New Year with colorful new wayfinding signs to encourage walking and exploration of the city.

The signs are part of the Downtown Vancouver Pedestrian Wayfinding Plan, which was developed with the help over 20 community stakeholders representing different organizations, neighborhood associations and businesses.

The plan was developed in an effort to improve navigation in the downtown area, encourage walking and exploration, support the vitality of downtown businesses and services, and for being reflect the character of the community.`