New Leader for Port of Portland 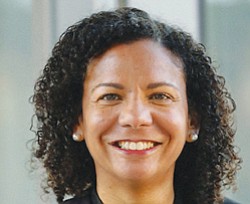 Gov. Kate Brown has appointed Alice Cuprill-Comas as president of the Port of Portland Commission.

Cuprill-Comas is senior vice president and general counsel for Oregon Health & Science University, and she replaces Jim Carter who just completed an eight-year term as Commission President, and who agreed to remain as a commissioner until his replacement was selected.

“I sincerely appreciate Jim Carter’s years of service, and welcome Alice Cuprill-Comas to the Port of Portland Commission,” Brown said, when she made the announcement last week. “The Port Commission plays a key role in propelling statewide economic prosperity, and Alice’s visionary leadership will help ensure our marine ports and air terminals continue to meet the needs of Oregonians in the competitive, global economy.”

Before joining OHSU in November 2012, Cuprill-Comas was in private practice for more than 15 years, most recently as a partner at Ater Wynne in Portland. She has also served as general counsel to Prometheus Energy Company, an alternative fuels company with international operations headquartered in Seattle. Originally from Mayaguez, Puerto Rico, Cuprill-Comas earned a Bachelor of Arts Degree with honors from the University of Texas in Austin in 1992, and a Juris Doctor from Lewis & Clark in Portland in 1994.

“It’s an honor to lead the Port Commission at a time when the organization is facing so many exciting opportunities,” Cuprill-Comas said. “From a major airport expansion, to Portland Harbor Superfund cleanup and our marine future, these are complex issues that can make a difference in quality of life for families in our region.”

“On behalf of all of us at the Port of Portland, we thank Jim Carter for his tremendous leadership over the years,” said Curtis Robinhold, Port executive director. “Jim presided over important opportunities for the Port with a thoughtful approach and keen guidance that benefits the thousands of people who rely on our airports, marine terminals and business parks every day.”

The nine-member Port Commission sets Port policy during its monthly meetings. At least two commissioners must each live in one of the three counties in the Port district (Multnomah, Washington and Clackamas counties). The remaining members may live in any part of the state. Commissioners are unpaid volunteers who are appointed by the Governor and confirmed by the Oregon Senate. They serve four-year terms and can be reappointed. Commission presidents are selected by and serve at the pleasure of the Governor. The Commission appoints the Port's executive director.