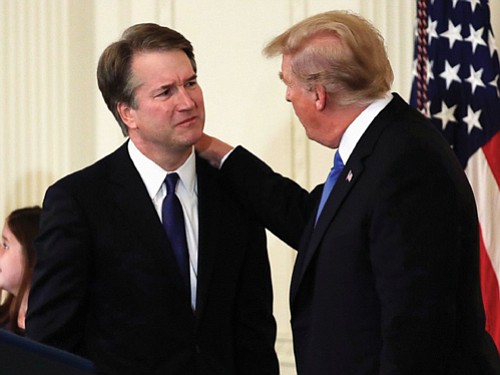 President Donald Trump chose Brett Kavanaugh, a solidly conservative, politically connected judge, for the Supreme Court Monday, setting up a ferocious confirmation battle with Democrats as he seeks to shift the nation’s highest court ever further to the right.

A favorite of the Republican legal establishment in Washington, D.C. Kavanaugh, 53, is a former law clerk for retiring Justice Anthony Kennedy, a Republican appointee. Like Trump’s first nominee last year, Justice Neil Gorsuch, Kavanaugh could help remake the court for decades to come with rulings that could restrict abortion, expand gun rights and roll back key parts of Obamacare.

Kavanaugh, who serves on the U.S. Court of Appeals for the D.C. Circuit, is expected to be less receptive to abortion and gay rights than Kennedy was. He also has taken an expansive view of executive power and has favored limits on investigating the president.

Democrats and liberal advocacy groups—including many in Oregon—have expressed their staunch opposition.

“There can be no mistaking Trump’s Supreme Court nomination for anything but what it is: a direct attempt to overturn Roe v. Wade,” said U.S. Sen. Ron Wyden, D-Ore. “American women could lose the right to chart the courses of their own lives, finding their futures are determined by the whims of fanatical state legislators and the availability of contraception.”

President Trump has in the past expressed a desire to overturn Roe V Wade by picking “pro-life justices on the court.

“Americans with pre-existing conditions could lose life-saving health care. Marriage equality could be overturned. Racial inequality and blatant voter suppression could be further embraced by the highest court in the land,” said Merkley, who has also expressed interest as a 2020 presidential candidate.

In October, Kavanaugh voted to delay an abortion for a teenage immigrant who was in government custody, something that Planned Parenthood Advocates of Oregon highlighted as a concern that he would rule in similar fashion as Supreme Court Justice.

“Confirming judge Brett Kavanaugh would put in place an enduring conservative majority for decades to come…he will continue to apply the law unfairly to protect the rights of powerful corporations and the wealthy, but not the rights of minorities and the poor,” Cummings said.

U.S. Sen. Bernie Sanders, I-Vt., said a person with Kavanaugh’s political views should not be given a lifetime Supreme Court seat.

“President Trump’s Supreme Court nominee Brett Kavanaugh will be a rubber-stamp for an extreme, right-wing agenda pushed by corporations and billionaires,” he said.

--Associated Press contributed to this article