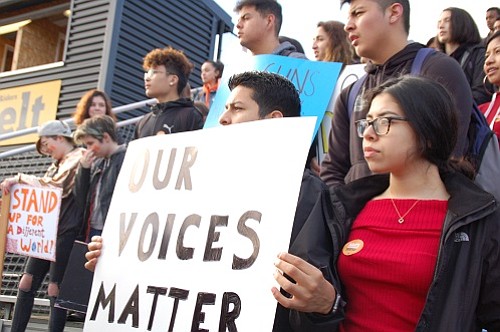 Classmates at Roosevelt High School walked out of school at 9:40 a.m. Wednesday and gathered outside for a rally to talk about gun laws in the U.S. and provide a moment of silence to memorialize the 17 who were shot down in Parkland, Fla. last month. They returned to class an hour later. Photo by Danny Peterson

At least 45 Portland area schools joined hundreds more across the nation Wednesday in solidarity with student-led walkouts to declare “enough” in response to growing gun violence and the mass school shooting in Parkland, Fla. one month ago.

Many of the demonstrations included a 17-minute moment of silence for the 17 students and teachers killed at Florida’s Marjory Stoneman Douglas High School. The message from student speeches and pickets was that Congress needs to approve gun control legislation.

Students from St. Andrew Nativity School in northeast Portland march toward Martin Luther King Boulevard chanting and holding signs in solidarity with nationwide student-led protests pleading for gun reforms. The march on Wednesday came on the one month anniversary of the Marjory Stoneman Douglas High School mass shooting in Florida that killed 17.

Among the peaceful demonstrations held locally was from a group of students at St. Andrew Nativity School, a northeast Portland middle school. The students left classes at 10 a.m. and held signs, marched down Martin Luther King Boulevard and chanted, “What do we want? Gun control! When do we want it? Now!”

Roosevelt High School in St. Johns also held a rally on their athletic field that included an education talk about gun laws in the U.S. and other countries, student and teacher testimonies, and a moment of silence.

“We just want to survive high school without being gunned down,” one Roosevelt sophomore pleaded to the crowd of over a hundred students and teachers.

Tracie Talerico, who has been teaching English at the school for the past four years, was a Marjory Stoneman Douglas High School graduate in 1996.

“I didn’t have lockdown drills, the only drills I ever had were fire drills,” she said to students and administrators.

Roosevelt High School students assemble in the stands of their athletic field to add their voices to the issue of gun violence and school safety during a school walk-out in solidarity with similar actions Wednesday at schools across the nation. Portland School Superintendent Guadalupe Guerrero and Oregon Gov. Kate Brown and others also showed their support by attending the demonstration.

Senior Magda Armendarig Sullivan, 17, made the case for adopting policies similar to Australia. That country banned semi-automatic weapons, created more hurdles for people to buy guns, and implemented a government gun buy-back program. They’ve not had a mass shooting since the laws took place in 1996.

“I hope that lawmakers see they need to listen to us and they need to change the laws surrounding guns,” Armendarig Sullivan told the Portland Observer.

“I feel like it’s been happening my whole life. I’ve watched kids die and wondered if that could’ve been me. And it’s just kind of been swept under the rug,” another student, Dyllan Newville, 16, remarked.

“I just hope that we’re heard or seen, and that somebody takes an action with us, not just us,” sophomore Taylor Greene, 15, said.

Greene said she will be helping with an a “March for Our Lives” demonstration happening on Saturday, March 24 in downtown Portland, which will also coincide with protests across the nation in solidarity with the Parkland students who have been advocating gun law reforms.