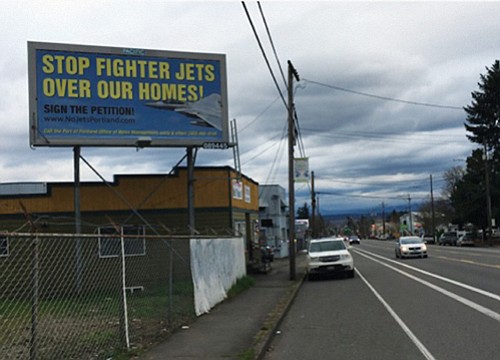 A billboard message raises objections to noise from Oregon Air National Guard flights over residential areas near the Portland Airport, paid for by a resident of the adjacent Cully Neighborhood who is fighting the military’s plans to increase a landing technique that makes the noise from landings even louder.

Andrew Pritchard has taken a fashionable approach to air his gripes: He bought advertising on a couple of billboards. His complaints? Military fighter jets over his Cully neighborhood.

Pritchard hopes the billboards will encourage people to sign his petition against flights over civilian areas by the Oregon Air National Guard, based at Portland International Airport.

Specifically, Pritchard wants the Air Guard to not increase its use of an efficient – but very noisy – type of special landing called the Overhead Continuous Descent Approach. The Guard has used this type of landing in the past, as opposed to a slower, standard glide in landing, but wants to increase the hours and days it can operate the approaches.

Pritchard, who said he’s lived in the Cully neighborhood near the airport for more than a dozen years, rented the billboards on Northeast Cully Boulevard, and along Mason and Prescott streets, to get more people to sign his nojetsportland.com petition. He put the petition online in November but said the billboards, which have only been up for a couple of weeks, have helped boost signatures and more than 600 have already signed.

The Air Guard tested the increased use of the continuous descent landing for six months last year, collecting data from area residents both before and after the tests, in collaboration with the airport’s Citizen Noise Advisory Committee.

The Guard asked for five changes: To allow visiting aircraft for training exercises, increase authorized runways from two to four, expand hours of daily exercises, and allow a provision for closed pattern landings for emergency and safety reasons.

Last week, the noise committee released a preliminary report. The only request it approved was to increase runways used from two to four. The committee declined to rule on closed pattern landings since it is a safety issue, said Philip Stenstrom, manager of the Port of Portland’s Aviation Noise Program.

The Guard was at the meeting and is aware of the committee’s decision, Stenstrom said, and the next step is a formal response that he will send to the Guard in a couple of weeks.

“None of it is binding, but it can help the Guard decide what flight elements to include in their operational procedures,” he said.

Stenstrom noted that the Guard, which has been at the airport since 1940, and the Port of Portland go back a long way and will continue to work together on noise issues for a long time to come.

“They signed a 50-year lease and are only in their third year,” he said. “They’re going to be around for a long time.”

Stenstrom said people periodically complain about noise from jets, but this time it seems to be focused on the rapid descent landings.

So, who decides? The Port controls the airspace for about five miles around the control tower, Stenstrom said, but “the pilot in command is the ultimate authority for keeping the aircraft safe.”

Under Federal Aviation Authority rules, air traffic controllers can overrule a pilot if safety rules are being violated, but noise abatement is not considered a safety concern.