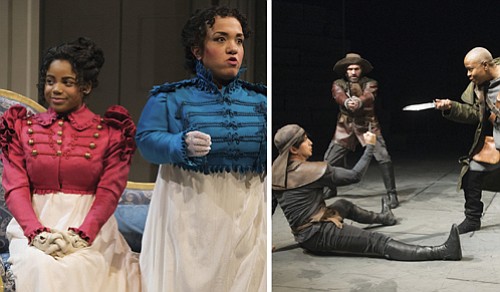 LEFT: Lucy Steele (Samantha Miller) and her sister Anne (Lauren Modica) hold a secret that will be of great interest to Elinor and to Edward’s family in ‘Sense and Sensibility’ and RIGHT: Bardolph (Robert Vincent Frank, in back) tries to keep his drinking buddies from killing each other in ‘Henvy V,’ Shakespeare’s play about a young king who openly struggles with the questions of what it means to be a political leader. Both plays open a new season at the Oregon Shakespeare Festival in Ashland. Photos by Jenny Graham, Oregon Shakespeare Festival

As the Oregon Shakespeare Festival opens its 2018 season, I can offer two good reasons to begin planning a trip to Ashland: two plays directed by women of color who offer a fresh take on two classic stories.

The first is "Henry V," Shakespeare's play about a young king who openly struggles with the questions of what it means to be a political leader, even as he makes weighty decisions to commit his subjects to a costly war. This production marks the completion of a cycle of four plays, with many of the cast members who appeared in one or more of the prior productions, Richard II in 2016 and Henry IV Parts 1 and 2 in 2017. The titular king of this production is portrayed with gripping intensity by Daniel Jose' Molina, who last season showed us the evolution of a rebellious Prince Hal who resents his father's grasp of the throne and the resulting expectations thrust upon him as the heir to a Henry finally compelled to shed prior associations to assume the role and finds himself suited for it.

In this production in the intimate Thomas Theater, Molina's Henry pulses with an immediacy one rarely sees on stage; One senses him wrestling with the import of his actions with such visceral energy that Shakespeare's words emerge as if in a genuine fight for clarity. Yet Molina still channels the young wastrel; his cynicism still courses not far below the surface, so that his struggles for meaning contain a sense of playfulness and even mischief. He is a marvel to watch, and is backed by an equally marvelous, facile, and energetic cast that feels much larger than it is.

Director Rosa Joshi has said that she conceives Shakespeare's history plays as being more about politics than history and this production successfully pitches the action in a register that feels both specific and universal. What compels people to follow a leader? What is the distance between what compels them and the actual person? What are the costs of war and the incentives that drive it? The staging is spare, with a vibrant design that involves interlocking boxes which shift and move throughout the production, often in a manner that helps us grasp what the story's fights and struggles and deaths are costing the characters. Death and bloodshed and scene changes are conveyed with splashes of color and shifts in energy; the design and action have been enlisted to lend the action immediacy. It's an original approach and part of what makes this production feel relevant and fresh.

"Sense and Sensibility" is pitched in a different register entirely; We are in Jane Austen's England, and director Hana Sharif is an Austen fan who wants us to experience a Regency aesthetic. And yet that aesthetic is delightfully askew in a way that reveals its truth. In the usual Austen story, the conflicts seem appealingly frivolous; though women are central, romance and marriage are the focus, which seems fluffy to our modern eyes. But in Sharif's rendering, working from a smart script by Kate Hamill, we see more clearly how high the stakes are for these women; it's a world where a good match is one's only hope for avoiding poverty, no matter how bright and witty one is.