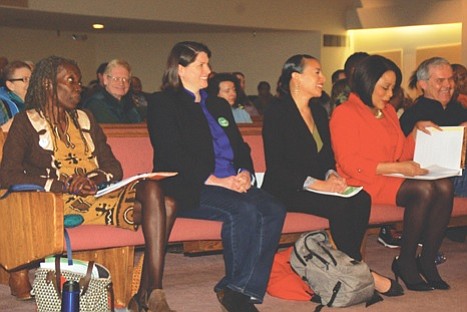 A diverse group of candidates running for a future open seat on the Portland City Council voiced their concerns during a Black Voices candidates’ forum at Maranatha Church in northeast Portland Saturday, advocating for change on hot topic issues like homelessness, gentrification and racism.

The five candidates, Andrea Valderrama, Loretta Smith, Stuart Emmons, Felicia Williams and Jo Ann Hardesty, answered questions posed by local moderator and civil rights activist C.J. Robbins, including their greatest concerns on and why they were running for the position No. 3 seat which will be left vacant at the end of the year with the political retirement of current City Commissioner Dan Saltzman.

“I understand how to address these issues, not just to get good ideas, but have the means to put them into action and what type of budget makes the most sense for what type of action,” Valderrama said. “Those are things I’ve already been working on.”

Stuart Emmons, a Portland architect and community activist, said he has been a housing advocate for the last 20 years.

“We need someone with a successful track record delivering housing, and I am that candidate,” Emmons said. “I will bring decades of private sector experience and actually getting projects built, and not just talking about them.”

Loretta Smith, a current member of the Multnomah County Board of Commissioners, who can’t run for re-election to her post because of term limits, has thrown her hat into the City Council race. On creating more affordable housing in the city, Smith said she wants to clean up polluted lots and build homes on them.

“There is no question that housing is probably the most important issue for folks living in Portland and the state of Oregon. But there are opportunities we can take if we just push forward and be very deliberate and intentional about what we’re going to do.

“We have about 989 brownfields in this community, properties that need to be cleaned up,” Smith said. “We can use those to get mixed-use (buildings constructed) so more folks can get affordable housing right here in this inner city area.”

Smith said she also believes the city should consider housing the homeless in the long-empty and never used Wapato Jail in north Portland.

“It doesn’t make sense that we have 88 people who have died in our streets last year when we have a building we spent $100 million for and that we spend $500,000 a year to maintain and has no one is in it,” she said.

Emmons said he agreed with Smith on Wapato, and doesn’t think the city is doing nearly enough to ease the housing pressures. He released his own comprehensive housing plan last week, called the Portland Home Project.