Principal lets guard down to dance and inspire 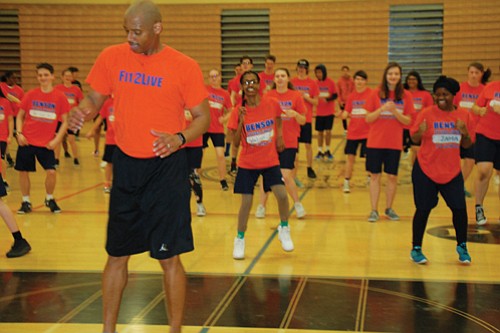 Benson High School Principal Curtis Wilson inspires students by teaching a Zumba dance class during a freshmen physical education class as a way of connecting with the over 300 new students that come to Benson each year. Photo by Danny Peterson

It’s not every day that you will find your school principal at the front of the class leading charges in a dance routine. But that’s exactly what Benson High School Principal Curtis Wilson did Thursday for boys and girls enrolled in a Benson freshmen physical education class.

Wilson started teaching Zumba, the fitness craze that uses the beats from hip-hop, samba, salsa, mambo, and other music to provide motivation and drive for aerobic exercise, when he began as principal of the northeast Portland school five years ago.

It’s a tradition he has held one day each year at Benson, in the spring, ever since.

The school leader says it’s a great way of connecting with the over 300 new freshman that come to his school each year,

“To me, it’s negative energy out of my body. And so I really enjoy it,” Wilson told the Portland Observer. “Now do I have enough time to do it on a consistent basis anymore? No. But this one day, I just move all my appointments to the side.”

Wilson was introduced to Zumba at his gym a few years ago. At first, he was an assistant instructor for the class, which was held regularly at the school before he arrived there. But the main instructor wasn’t available the second year, so he memorized the moves and took over.

Wilson is pretty sure students appreciate their face to face time with him in class.

“I really want to spend [time] with these kids so that we can make life-long memories,” he said. “Because years from now, when they’re off in college or where ever, high school will start to fade. But I’m pretty sure that spending a day with their principal dancing will probably stay with them for a long time.”