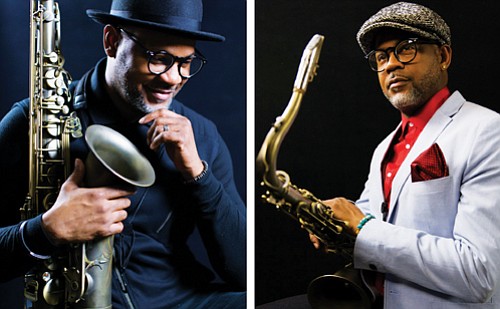 Jazz saxophonist Eldon “T” Jones will reunite with the original members of N Touch, a band formed mostly from Jefferson High School alumni in the 1990s, for a one-night-only reunion show Friday, May 11 at the Alberta Rose Theatre.

After 17 years apart, the original members of a popular band that started in north Portland, N Touch, will reunite for a one night only performance at the Alberta Rose Theatre in northeast Portland Friday.

The jazz group, led by saxophonist Eldon “T” Jones, was comprised of mostly Jefferson High School alumni from its heyday when the school was a thriving arts and culture hub. Jones, who grew up listening to his mom sing and play piano, also studied music at Mt Hood Community College.

Pianist Patrick Cooper, keyboardist Chris Turner, and Jones’ brother percussionist Anthony Jones were some of the first people Jones started to jam with. Later they would become some of the inaugural members of N Touch.

Jones and Cooper were both musicians at a local church when they hatched the idea to start a band. They turned their neighborhood jam sessions into rehearsals, along with guitarist David Allen, percussionist Darius Fentress, and bassist Donovan Fairly.

Jones, 49, fondly remembered jamming sessions he held in his family home in the Boise neighborhood of a pre-gentrified north Portland with friends.

“We were able to get together all within like walking distance from each other. We were part of a community and the music kind of reflects that same sound,” Jones told the Portland Observer. “For us to get back together, the original group, after all these years, is going to be quite a celebration,” he added.

Culturally infusing different styles from jazz to gospel to popular R&B and funk, the band went from playing small gigs at Friday’s Café in Kenton in the mid-90s to playing festivals and opening for big name acts like Tower of Power and Earth, Wind, & Fire under the management of George Brown. They released their self titled CD in 2001.

As the years wore on N Touch continued as a band, and is still active today, but with differing members as the original musicians enjoyed career successes.

Turner played with the late pop superstar Prince in his later years, Fentress toured with gospel singer Fred Hammond, Anthony Jones played in billboard topping records as well as played with renowned Portland based jazz ensemble Pink Martini, and Cooper worked with a number of artists including pianist Bobbby Lyle.

“Most of the guys from just starting in the band has been able to achieve a great amount of success in the music industry. But we kind of all started from here, cutting our teeth, honing our skills,” Jones said.

Jones, too, has enjoyed success since those first jam sessions over 20 years ago. He’s worked with the Blazers and Nike for events, performed with the Grammy nominated artist Najee, and done music for the comedian Sindad, who is his friend, among many other artists.

In January 2017 Jones was honored with a lifetime achievement award for community service from the World Arts Foundation at the 32nd Annual Martin Luther King Tribute, an event he performs regularly for.

Tickets are available $19 in advance, $23 at the door, and $30 VIP an online through Alberta Rose Theatre and over the phone at 503-764-4131. Find the N Touch Reunion Show event on Facebook for more information. Their self-title CD, N Touch, is available at cdbaby.com.