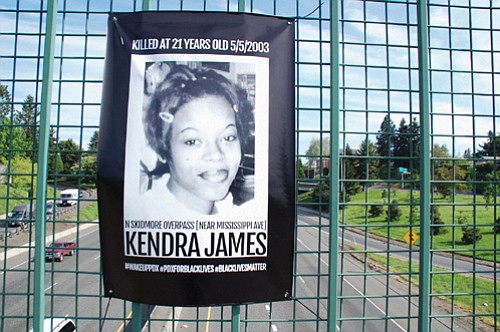 A portrait of the late Kendra James goes up as part of a makeshift memorial created over the weekend on the North Skidmore Street overpass above I-5. It marked the 15th anniversary of the fatal police shooting of the unarmed 21-year-old Portland woman during a traffic stop. Photo by Danny Peterson

A memorial for Kendra James was put up on the Skidmore Street overpass above I-5 over the weekend in the same section of road where she was killed in a officer involved shooting 15 years ago. The tribute featured flowers, candles, a large portrait of James, and loving messages written in chalk.

Signs that read “Say her name Kendra James” and “Black Lives Matter” were displayed and the words “Black loved ones murdered by cops” were written in chalk, with hearts drawn and the names of other police shooting victims written beneath it.

Saturday marked the 15th anniversary of James’ death in 2003. She was 21-years-old and unarmed at the time. After arresting a man who was driving the car, James jumped from the back seat of the car to the front and got into a struggle with police.

The officer said he shot her to save his life and was not removed from the force.