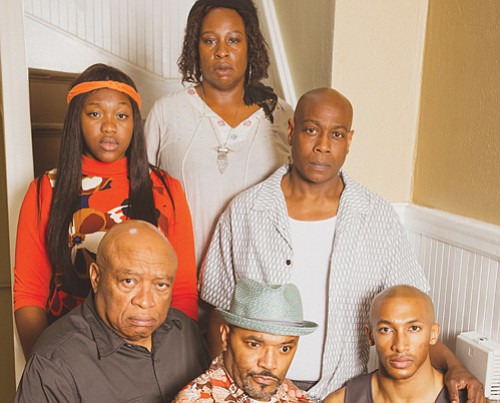 Displacement of African-Americans in 1970s Portland is captured in ‘Left Hook,’ a new play inspired in part by the Knott Street Boxing Club and the urban renewal projects that forced people out of their historical neighborhoods. The production premiers for the Vanport Mosaic Festival, a community wide festival that commemorates the 1948 Memorial Day flood that displaced thousands of people of color. Pictured are cast members (top row, center) Shareen Jacobs; (middle row from left) Tonea Lolin and Jasper Howard; and (bottom row from left) Anthony Armstrong, Kenneth Dembo, and Jame Savannah. Photo by Shawnte Sims

A new play that touches on the history of displacement in 1970s Portland, where hundreds of homes and businesses were razed in historical black neighborhoods, will debut as part of the Vanport Mosaic Festival.

“Left Hook” is inspired in part by the history of the Knott Street Boxing Club and the urban renewal projects that disrupted a once vibrant neighborhood. It is a follow up to playwright Rich Rubin’s 2016 play “Cottonwood in the Flood,” which was about Vanport and the May 30, 1948 Memorial Day flood that destroyed the Portland town 70 years ago.

The new play focuses on a hub of thriving African American businesses and homes in the Albina District of north and northeast Portland where many former Vanport residents resided. Several blocks of the neighborhood were eventually razed when urban renewal projects spurred the expansion of Emanuel Hospital and prompted the demolition of about 300 homes of mostly African American families who were then forced to relocate.

‘Left Hook” has an all African-American and local cast and uses the story of Knott Street to tell a story about a fictitious boxing gym whose future is made uncertain by the changes.

Damaris Webb, a Portland native and African American theater maker, is once again helming the role of director for Rubin’s play after bringing his Cottonwood in the Flood to life on the stage two years ago.

She is the co-founder and director of the Vanport Mosaic, a non-profit that engages the community through storytelling, art, education, and media about forgotten local histories. The effort was first started by Laura Lo Forti, a self-described ‘story midwife’ and ‘recovering journalist,’ who began working with elders in the community who once lived in or remembered Vanport to curate and record their stories.

As Lo Forti was collecting these oral histories, she had gotten word that Webb was working on a play about Vanport, Cottonwood in the Flood, through a mutual friend. They got in touch with each other and have been running Vanport Mosaic together, ever since.

The community of Vanport was home to many groups including African-Americans, whites, Japanese-Americans returning from internment during World War II, and Native Americans. It was one of the first integrated communities of its time in the state.

By 1947 the town that once boasted 40,000 dwindled to half that, but 4,000 residents of color stayed. That changed when the 1948 flood wiped out the community, even as the Portland Housing Authority was vying to dismantle it. The former residents were forced to move somewhere else, which for many blacks would end up being the Albina District.

Due to a discriminatory lending practice that limited African American presence elsewhere in the city, known as redlining, many Portland blacks who sought rentals or buying a house were also sequestered to the Albina district.

Urban renewal efforts by the city, such as the construction of the Memorial Coliseum and the Interstate 5 freeway cut through north Portland neighborhoods in the 1960s, and the 1970s expansion of Emanuel Hospital, created economic blight in the area and displaced hundreds. The hospital expansion permanently altered some of the district’s signature features and, in some areas, razed sections of neighborhood without developing anything on it.