A Runoff for November

Smith optimistic she can catch Hardesty 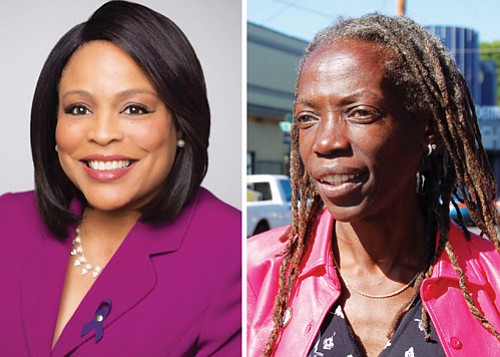 Activist and former state representative Jo Ann Hardesty (right) won nearly 46 percent of the vote in Tuesday’s May Primary election for a seat on the Portland City Council, falling short of the at least 50 percent plus one vote total needed to avoid a runoff. She will face Multnomah County Commissioner Loretta Smith (left) in the November General Election. Smith finishing in second place captured about 21 percent of the primary vote.

Results from Tuesday’s May Primary Election means it’s certain that Portland will seat its first black female City Council member next year as the two top candidates in the race, Jo Ann Hardesty, who captured 46 percent of the vote, and Loretta Smith, with the second highest total of 21 percent, will face off in the November General Election.

Both are African-Americans and advanced from a field of six candidates in the election competing for the seat held by incumbent City Commissioner Dan Saltzman who is stepping down when his term ends in January.

“I think it's amazing and outstanding that in a city that has less than six percent African Americans, that you have two black women who are in the runoff to be the next Portland City Council person. And these seats don't open that often” Smith told the Portland Observer.

Smith, who was a Multnomah County Commissioner for eight years and worked for Senator Ron Wyden for over two decades, was thought to be a front-runner by many, but now lags 25 percentage points behind Hardesty. Still, she’s maintaining an optimistic view heading into the general election.

“I was really surprised that it was such a low voter turnout. But I think the primary voters, they've spoken, and I am excited about going to November. I'm excited about being able to reintroduce myself to the people,” Smith said.

Turnout in Multnomah County was only about 31 percent, which was lower than statewide results and a smaller percentage than the 2014 Primary Election in which turnout was almost 33 percent. The number of ballots counted, however, was greater -- both in Multnomah County and the state -- because there is a bigger population now than in 2014 and a larger number of registered voters, due in part to the motor voter registration system that went into effect in 2016.

Smith hopes to rally the youth between now and November, many of whom are being automatically registered to vote thanks to that bill.

“I think it's the perfect time to get young people, people who haven't ordinarily participated in the democratic process to get them involved and get them engaged. I have a huge track record working with our youth and our seniors. And I think they're going to be a really important part of the campaign.” she said.

Both Smith and Hardesty campaigned on helping solve homelessness and affordable housing issues in Portland, though they’ve disagreed on some aspects of how to go about that. While Smith supports turning the never-opened north Portland Wapato jail into a shelter, Hardesty disagreed.

One of Hardesty’s proposals was to hire homeless people to help clean up the city. The former U.S. Navy woman and three-term state representative also runs on a platform of police reform. She could not be reached for comment in time for publication of this article.

In other local races, Multnomah County Chair Deborah Kafoury secured her bid for re-election by capturing 71 percent of the vote, far above the more than 50 percent needed to avoid a runoff. New comer Susheela Jayapal, a former general counsel at Aidas America and longtime community volunteer, also won outright by capturing nearly 62 percent of the vote in the election for Multnomah County Commissioner for the seat being vacated by Smith.

Jayapal, who was born in India, was running against three others—construction business owner Sharon Maxwell, former restaurateur and veteran Bruce Broussard, and coffee shop owner Maria Garcia--all candidates of color. The victories by Kafoury and Jayapal’s are unofficial until 20 days after election day.

In southeast Portland, former state Rep. Shemia Fagan (D-Clackamas) captured 62 percent of the vote in a successful campaign to unseat incumbent state Senator Rod Monroe in the Democratic Party. The race has had a sharp focus on housing issues. Monroe netted just above 20 percent of the vote while the third candidate, Somali-born immigrant rights activist Kayse Jama, came in third.

Monroe who has been in public office since 1976, drew scrutiny from fellow Democrats for being a landlord that opposed tenant protections, such as overturning the statewide ban on rent control and outlawing “no-cause” evictions. He owns a 51-unit apartment complex in east Portland and has been sued by one of his tenants.

Both Fagan, a civil rights attorney, and Jama ran on a platform of giving cities the ability to impose rent control.

In statewide voting, gubernatorial candidate Knute Buehler of Bend won the Republican Party nomination and will face off against incumbent Gov. Kate Brown, a Democrat, in November.