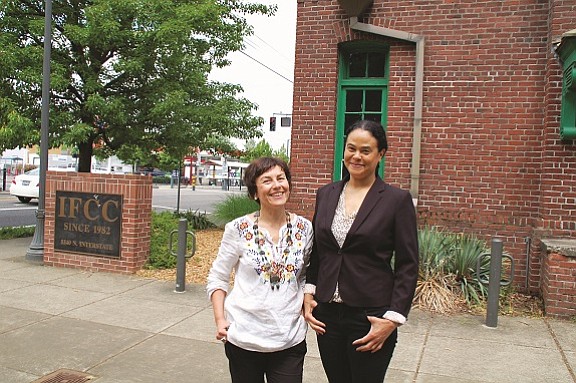 Laura Lo Forti (left) and Damaris Webb, co-organizers of the Vanport Mosaic Festival, pose outside the Interstate Firehouse Cultural Center on North Interstate Avenue, showcasing one of the primary event venues for the annual celebration taking place this long Memorial Day weekend on the 70th anniversary of the Vanport Flood. The IFCC will host several exhibitions, like Vanport: The Surge of Social Change; Anywhere but Here: The History of Housing and Discrimination in Oregon; and Our City, Our Voice: Excavating Portland’s History through Art. A new play about displacement in Portland, “Left Hook,” will also make its world premiere at the IFCC on Thursday. Photo by Danny Peterson

On a warm Memorial Day 70 years ago, Portland was forever transformed by Oregon’s biggest natural disaster of the 20th century: The Vanport Flood.

It’s a big anniversary, and that’s why the Vanport Mosaic Festival is pulling out the stops for six days of activities that weave together fun, fascination, family and serious reflection.

It’s all happening with events beginning Wednesday, May 23 and continuing through the Memorial Day holiday on Monday, May 28 at multiple venues that are specifically free of charge or kept at low-cost for the community.

Co-organizers Laura Lo Forti and Damaris Webb have created a rich program that combines storytelling, performance, history, physical activities and even a disaster preparedness workshop. The Royal Rosarians will also be planting a special commemorative rose at Peninsula Park, and the Rosarian planting is himself a Vanport survivor.

A big highlight for 2018 is a partnership with the Confluence Project, which promotes understanding of indigenous communities of the Columbia River through historic preservation and construction of a series of hiking trails stretching along the Washington side of the Columbia Gorge. The trails are vast and fascinating landscapes designed by architect Maya Lin, creator of the US Veterans Memorial in Washington, D.C.

Key to local tribes was loss of Celilo Village on the Columbia when the Dalles Dam was built in 1957. Before being flooded for the dam by the federal government, Celilo was considered the oldest sustained community on the North American continent. The damn also destroyed Celilo’s huge waterfall, one of the most important tribal fishing spots and a center of the tribal economy.

“We feel a sense of urgency right now because many of the elders who lived through these things are in their 80s and 90s,” Lo Forti says. “We can’t lose their stories because they have so much to teach us and that is how we really learn -- from each other.”

Lo Forti says it’s all about defining the idea of “memory activism.”

“In these times it seems as if remembering history is an act of resistance,” Lo Forti says. “Our goal is to engage more and more memory activists.”

The Vanport Flood holds a special place in Oregon history.

A long rainy winter had raised the water level of the Columbia River, and on Memorial Day -- May 30, 1948, at 4:05 p.m. -- a large piece of the earthen levy protecting the town collapsed.

All of Vanport’s 40,000 residents lost their homes, and 15 lost their lives. The disaster is sometimes called “Oregon’s Katrina,” because like Hurricane Katrina in 2005, the Vanport Flood impacted communities of color disproportionately, including African American shipyard workers and their families who had moved to Vanport to support the US military effort during World War II.