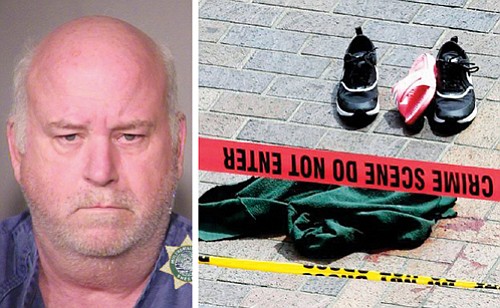 Greg Phillip Porter in a police mug shot charged with three counts of attempted murder (left), and the clothing left behind on a sidewalk (right) in a scene outside of Portland State University on Friday after three pedestrians were hit in what looked like an intentional act.

A driver accused of ramming three women walking on a sidewalk Friday at Portland State University in downtown Portland, critically injuring one of them, before speeding away and getting arrested within hours of the crash, was arraigned in court on multiple charges Tuesday.

Greg Phillip Porter, 61, faces three counts each of attempted murder, assault, reckless driving and failure to perform the duties of a driver.

Witness Christopher Bond said he was standing on the sidewalk when he saw the SUV hit at least two women. He estimated it was traveling about 45 mph.

Bond said he turned to help, and the driver "gunned it," nearly hitting him.

Kat Caputo was talking to a friend by the light-rail station when she heard a commotion and turned around. She saw two women lying on the sidewalk and another leaning against a brick wall. Others were shouting that a car had jumped the curb, struck the women and sped away.

The crash stunned the city on the Friday before Memorial Day and the anniversary of a racist attack on Max light rail last year in which two men were stabbed to death when they confronted a passenger who was spewing hateful comments at two teenage girls of color.