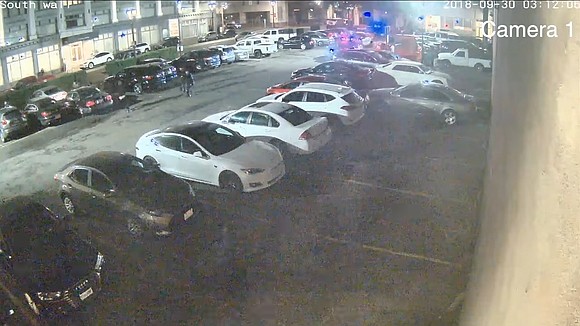 Video from a police investigation shows the involvement of police officers in the Sept. 30 shooting death of Patrick Kimmons, a 27-year-old black man. The video from a downtown parking lot also shows Kimmons in a fight and firing his gun on two other people in the seconds before being confronted by police.

A Multnomah County Grand Jury has determined that the use of deadly force by police was justified in the death of Patrick Kimmons, a 27-year-old black man killed Sept. 30 in an officer-involved shooting, downtown.

Multnomah County District Attorney Rod Underhill said the grand jury determined the police in question, Sgt. Garry Britt and Officer Jeffrey Livingston, acted in self defense or defense of a third person and would face no criminal charges.

Newly released video from the police investigation shows that the officers shot Kimmons seconds after he fired his own firearm five times against two people in a fight and then starting running toward police while still brandishing the gun.

Authorities said it happened around 3 a.m. as the two officers were providing extra patrols at a parking lot at Southwest Third Avenue and Harvey Milk Street that had been the location of prior violent incidents. The officers fired 12 rounds at Kimmons nine of which struck him, it was later determined by the state medical examiner. He was turned away from the police when he collapsed between some cars in the parking lot.

A gun was recovered near him and several other firearms were recovered at the scene.

Police said an internal administrative investigation of the entire incident is underway and is estimated to take about 10 weeks.

The grand jury’s decision was met with a protest after it was announced Wednesday with supporters of Kimmons demonstrating outside the Multnomah County Courthouse. A street was temporarily blocked by the group and a motorist was arrested for driving into one of the protesters who escaped injury, authorities said.

The driver, Mark A. Dickerson, 55, was detained in jail and charged with assault in the fourth degree, reckless endangering and reckless driving.

Editor's Update: The charges against Dickerson were dismissed by a judge before trial last March because of the failure of the alleged victim to be available to testify. According to a lawsuit by Dickerson and reporting by the Oregonian/OregonLive, Dickerson, contended the protesters were the ones violating the law by, among other things, impeding traffic.