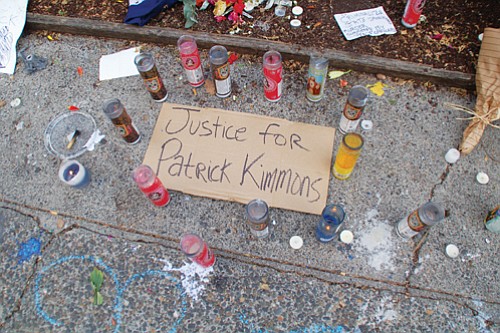 Flowers, candles and messages honor the memory of Patrick Kimmons who died in an officer-involved shooting Sunday in downtown Portland. Photo by Danny Peterson

A community is in mourning even as many questions remain unanswered in the wake of an officer-involved shooting early Sunday that left one man dead. It happened around 3:30 a.m. at Southwest Third and Harvey Milk Street (formerly Stark) as police responded to civilian-on-civilian gunfire that left two others injured.

Police said Kimmons was confronted by two officers who approached him after hearing gunshots in the vicinity. A gun was found near Kimmons and multiple other firearms were also found at the scene, police said.

The two other victims apparently were shot prior to police’s arrival on the scene, and they later transported themselves to a local hospital for serious, but non-life threatening injuries. Police said they believe the initial shooting was between gang-related individuals.

It’s unclear how many times police shot Kimmons, though police stated that multiple witnesses of the incident are being interviewed, as well as an examination of a video recovered at the scene, as part of the investigation. Two other police officers also witnessed the shooting.

Letha Winston, Kimmons’ mother, has started a gofundme page to help cover the family’s funeral costs. In the description she states Kimmons was “shot more than 15 times in the back as well as his legs,” but the claim was denied later by police. “This pain has to stop! I wouldn’t wish this reality on anyone,” Winston said.

Community members and activists from Don’t Shoot Portland held a candle light vigil for Kimmons near the area where he was shot. Mourners placed flowers, lit candles, and conveyed messages of protest, grief and love for the deceased man, who is survived by three young children and a girlfriend.

In the bureau’s statement, police offered sympathy to those affected by the shooting.

“The Police Bureau is sensitive to the fact a life was lost, and many people from the Portland community are impacted, including family, community partners, and officers. We will strive to release information as quickly as possible as the investigation unfolds,” the statement read.

Mayor Ted Wheeler released a statement Monday echoing the pursuit of transparency and offering sympathy to the Kimmons family and those affected by the shooting.

“In the coming days and weeks, many will rightly have questions about what happened. These questions are important; the answers are important. There are now multiple active investigations, and I am committed to ensuring accurate information is disclosed as quickly and completely as possible,” Wheeler said.

A Multnomah County Grand Jury and internal police review is to follow next, and after both of those are completed, additional information could be released, authorities added.