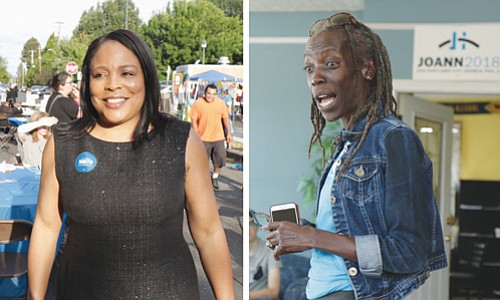 Just a week out from the Tuesday, Nov. 6 General Election and Oregon is poised to see a larger than normal turnout, boosted in part by a bigger interest in the Midterm elections nationally but also in a local race for a coveted Portland City Council seat that will make history by ushering in Portland’s first black female councilwoman—the contest between former NAACP President and State Rep. Jo Ann Hardesty and current Multnomah County Commissioner Loretta Smith.

It’s estimated that from 45 to 50 percent of eligible voters nationally will cast a ballot by Election Day, a turnout that would exceed any non-presidential election year going back 50 years, according to Michael McDonald, a University of Florida professor who studies and maintains a turnout database, electproject.org. A turnout that high would be leaps and bounds larger than just the last midterm election, in 2014, when a record low 36 percent of voters cast a ballot, the lowest since World War II.

Some voters in the community shared their thoughts with the Portland Observer about why more people may be voting this year.

“I mean obviously Trump has a huge impact on that. It’s kind of like revenge, I think,” said Gus Brunder from northeast Portland, who added that he votes in every election.

“I think because of what's happening in the nation, it seems bigger than usual,” he said.

According to McDonald, in a report on Oregon Public Broadcasting, early voting across the country has already reached record highs in comparison with other Midterms. There’s also a record number of candidates, including more women, who filed to run this year.

The voting trends are a reversal of what happened in Oregon in the May Primary when the turnout, at 34 percent, hit a low not seen in several decades. What’s more, turnout for the General Election traditionally nets a much higher swatch of voters than do the primaries.

The expected increase in voting could make the race for the City Council seat being vacated by retiring councilman Dan Saltzman a tighter one than the May Primary when six candidates ran and Hardesty finished first with 46 percent of the vote, and Smith a distant second at 21 percent of the total.

The battle between Smith’s campaign and Hardesty’s has been brutal for its attacks.

Smith has accused Hardesty of financial management of the volunteer-run NAACP, for victimizing her at a campaign event by dancing with a supporter she accused of sexually suggestive misconduct a few years back, and for accepting large campaign contributions from groups and organizations, despite Hardesty’s support for campaign limits and portraying herself as a small donor candidate.

Smith, meanwhile, must attain voter trust in spite of accusations of bullying by co-workers and complaints of inappropriate spending while serving as a county commissioner. Smith has denied the allegations and called the investigations biased against her.