Reducing the Risk of Stroke 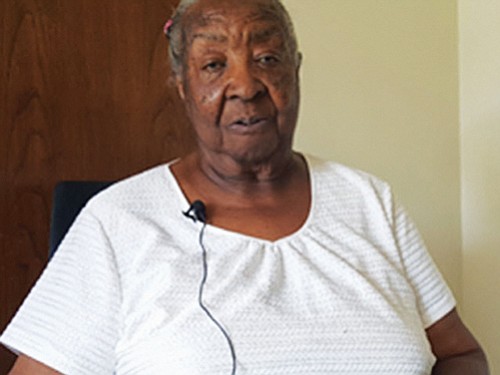 Ruth Jefferson-Simon, 86, is the 200th patient to receive a Watchman device at Legacy Emanuel Medical Center for patients with non-valvular artial fibrillation (A-Fib). She wants everyone to know that she “feels good.”

A northeast Portland mother and grandmother has become the 200th patient at Legacy Emanuel Medical Center to receive a one-time procedure that can reduce the risk of stroke in people with non-valvular atrial fibrillation (A-Fib).

The patient, Ruth Jefferson-Simon, 86, wants everyone to know that she “feels good.”

Legacy Emanuel was the first in Oregon to offer the Watchman device in 2015, and today the local hospital is in the top 10 of hospitals in the U.S. for implanting the medical product.

According to Dr. Amish Desai, Legacy’s structural heart medical director, patients who benefit from a Watchman are those with A-Fib who may experience bleeding complications from blood thinners and want an alternative to these medications.

Like most patients with A-Fib, Jefferson-Simon was put on blood thinners.

“I took blood thinners for years, which gave me bad GI bleeds,” she said.

Her lifestyle was compromised by her heart problems and the bleeding complications often left her short of breath. Soon day-to-day tasks became challenging. She still had to cook and care for her husband of 30 years who has dementia. There was very little energy left for her passion, fishing.

“I’m a good fisherman,” she said with a smile. “I can beat everybody catching bass, but they still want to challenge me.”

She keeps her fishing pole and tackle box ready and has gone to her favorite fishing hole several times since getting her Watchman.

The medical device is a one-time procedure and a permanent implant that closes off a part of the heart where blood clots commonly form.

"The Watchman device is a very low risk, minimally invasive treatment that greatly reduces their stroke risk. Instead of putting patients on blood thinners, it addresses the problem at its source," said Dr. Desai.

The Watchman is about the size of a quarter and it doesn’t require open-heart surgery. The doctor makes a small incision in the upper leg and a narrow tube is inserted. The doctor guides the Watchman through the tube, into the patient’s left atrial appendage. The procedure is done under general anesthesia and typically takes about an hour. Patients like Jefferson-Simon typically stay in the hospital 1-2 nights and go home. They remain on blood thinners 45-days after the procedure until the Watchman is permanently closed off.

Jefferson-Simon wasn’t afraid of getting the procedure; she was a born risk-taker. She grew up in a family of boys in Eldorado, AR. At age 10, her older brothers taught her how to drive.

She later moved to San Diego in the early 1960s, where Jefferson-Simon rode a Harley Davidson and traveled with a motorcycle club up and down the West Coast.

“Those were the good old days,” she laughed. “I just want to ride one more time but this time, on the back.”