Absorbed by the Experience

Plays worth seeing at the Oregon Shakespeare Festival 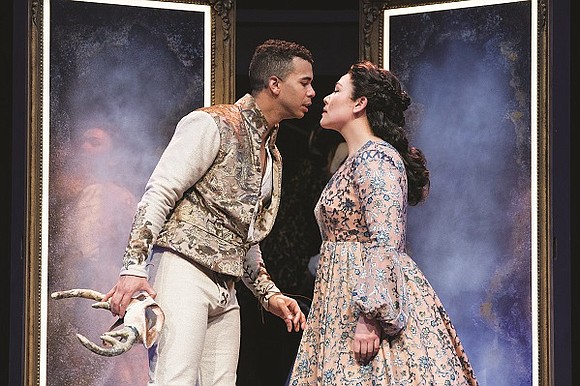 Theater at its best does more than entertain; it invites the willing into a unique act of embodiment as we experience the gift of presence offered on stage with an audience that only assembles once. But this summer, the company and audiences at the Oregon Shakespeare Festival have experienced that act of embodiment in especially challenging ways. Climate change has increased the problem of forest fires to a degree unprecedented in the festival's history, interfering with performances in the outdoor Allen Elizabethan Theater to an extraordinary degree. Many performances have been cancelled entirely; others have been moved into a smaller indoor space at Ashland High School, which involves a high level of commitment on the part of audiences (although it also sometimes is possible to opt for an indoor show). The air quality in Ashland has been impacted (as has been true elsewhere in the Northwest).

Nevertheless, the pay-off for participating in the theatrical practice of embodiment--including on the outdoor stage -- continues to be quite high enough to justify a trip to Ashland, especially as temperatures cool and disruptions become less frequent. A talented group of artists are all the more primed to offer the precious gifts of heart and movement that they have crafted and honed for the outdoor stage, and the two additional indoor shows that have opened this summer offer soulful windows into how humans struggle and the environment responds.

The outdoor shows will especially appeal to Shakespeare lovers, but also offer temptations to those who aren’t sure about the bard. Director Dámaso Rodriguez (who helms Portland’s Artists Repertory Theater) brings fresh life to Shakespeare’s most popular play, “Romeo and Juliet,” building from his recognition that what makes this story so tragic is not so much the untimely deaths of its protagonists but how easily those deaths could have been avoided. Much of the energy of this production comes from the sense that the conflicts and long-nursed hatred of its characters are traps they keep laying for themselves and then leaping into — and even the two adults who attempt to help the young lovers (the friar and the nurse) embody a frustrating sense of powerlessness that stems from succumbing to that false sense of inevitability. Ironically, the collective energy of this very solid cast serves to hold the energy of the conflicts in a way that helps you invest in the adolescent lovers, endearingly played by Emily Ota and William Thomas Hodgson — and they, in turn, make you believe in the heart animating their adolescent impulsiveness. Sara Bruner’s remarkable turn as Mercutio is alone worth the price of admission, conveying all the playfulness, fury, and despair that the brightest light in the community might feel in tangling with human folly writ this large. [Runs until Oct. 12]

“Love's Labor's Lost” isn’t one of Shakespeare’s most popular; its story can feel awkward to modern audiences and the plotting isn’t the bard’s best. But in the facile hands of director Amanda Dehnert, who has earned real credibility as (among other things) a director of musicals