Woman says she was sexually assaulted 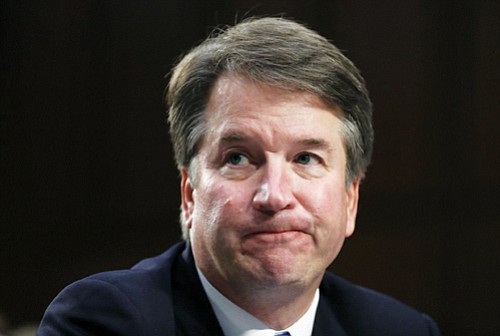 (AP) —Senate Republicans and Democrats fought determinedly Tuesday over who should testify at a high-stakes hearing on the allegation Supreme Court nominee Brett Kavanaugh sexually assaulted a girl in high school, 36 years ago.

Oddly, it remained unclear whether Christine Blasey Ford, the woman who set off the controversy over President Trump’s nominee, would appear at Monday’s Judiciary Committee hearing.

Democrats said they wanted more time for the FBI to investigate — and more witnesses besides Kavanaugh and Ford, hoping to avoid what would turn into merely a “he said, she said” moment. Those witnesses would include Kavanaugh’s high school friend Mark Judge, who Ford said was in the room when she was assaulted, but Judge said no. Kavanaugh has denied Ford’s allegation, and Judge says he doesn’t remember any such incident.

The furious jockeying over the hearing underscored the political potency so close to the November General Election that will decide control of both the House and Senate, not to mention the confirmation of a conservative justice likely to serve on the high court for decades.

Democrats see their arguments about treating women fairly as the best hope for either sinking the appellate judge’s nomination or, should Kavanaugh win confirmation, amplifying their appeals to female voters in November. Republicans have been careful to be seen as giving Ford a chance to be heard, mindful that outright dismissal of her accusation could hurt on Election Day.

Still, the risks of a public hearing starring the all-male lineup of Republicans on the committee could be high. Republicans said late Tuesday they were considering hiring outside attorneys, presumably including women, to question the witnesses.

Kavanaugh, 53, was at the White House for a second straight day, but again did not meet with Trump. The president said he was “totally supporting” Kavanaugh and rejected calls for the FBI to investigate the accusation.

Senate Minority Leader Chuck Schumer, D-N.Y., said an FBI investigation was essential. However, Trump rejected the idea of bringing in the FBI to reopen its background check of Kavanaugh, which would be likely to delay a confirmation vote until after the election. Republicans hope to have him confirmed by the Oct. 1 start of the next Supreme Court term.

Ford has said she was willing to testify. But panel chairman Chuck Grassley, R-Iowa, said repeated efforts to reach her had failed.

Ford, now a California psychology professor, went public with her story Sunday, telling The Washington Post that Kavanaugh had forced himself on her in a bedroom at a party when he was 17 and she was 15, attempting to remove her clothes and clapping his hand over her mouth when she tried to scream. She says she escaped when Judge jumped on the bed.