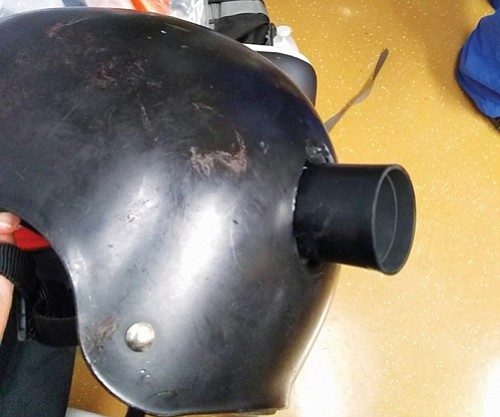 Portland protester Aaron Anthony Cantu released this photo of his bike helmet punctured from a flash-bang munition that he said Portland Police negligently fired during a counter-protest to right wing demonstrators last Aug. 4, downtown. Cantu has filed a lawsuit against the city, claiming the projectile caused a traumatic brain injury.

A man is suing the city of Portland for being hit in the back of the head with a flash-bang munition that police are accused of launching at counter-protestors without warning during a right-wing rally early last month in downtown Portland.

Aaron Anthony Cantu, who was wearing a bicycle helmet when he was struck, claims he suffered a traumatic brain injury when the device pierced the helmet during the protest and was treated initially by a street medic before being transported to hospital Aug. 4, a tort claim filed last week on Cantu’s behalf stated. The injury, which occurred on Southwest Columbia Street between First Avenue and Naito Parkway would’ve likely been fatal if not for the helmet, the claim said.

“The medics had to move him out of this dangerous situation created by created by Portland Police. Mr. Cantu thought he was going to die,” a notice sent to the city by attorneys Juan Chavez and Crystal Maloney stated.

The claim also states that Cantu did not receive warning from police before the projectiles were launched. It also stated Cantu had not witnessed any projectiles or violence from the people on the counter-protestor side.

The photos of Cantu’s injuries went viral on social media the day of the protest, though Police and the city’s Independent Police Review were unable to speak with him to confirm their authenticity. Cantu remained anonymous up when the claim was filed a week ago.

When Cantu first heard a loud explosion, the claim states, he immediately started running away. He heard three or more loud bangs before being hit and started bleeding from his head, eyes blurry, and unable to yell or speak. He was attended briefly by a street medic at a bus stop before fleeing on foot again as police continued firing projectiles before being taken to a hospital.

Portland police temporarily suspended use of the flash-bag weapons, which were intended to be a “less-lethal” crowd dispersal tool, immediately following the Aug. 4 protests and the multiple reports of injuries.

Cantu is the second person to have notified the city of the intention to sue for injuries caused by the crowd dispersal munitions. Michelle Fawcett filed a tort claim on Sept. 13 for allegedly receiving third-degree chemical burns from a flash-bang munition that hit her arm and chest.