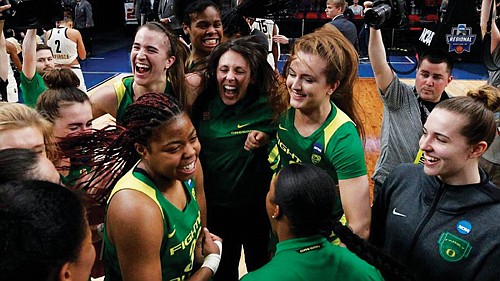 Advancing to the Final Four for the first time in program history, the Oregon Ducks Women Basketball team celebrates their 88-84 victory over Mississippi State at the Moda Center Sunday. Next up is a Friday matchup with No. 1 seed Baylor in Tampa, Fla.

Excitement was ringing in the air as the Oregon Ducks Women Basketball team clenched their first Final Four appearance in program history Sunday with a 88-84 win over Mississippi State at the Moda Center.

The second-seeded Ducks, whose victory over the top-seeded Bulldogs was a classic back-and-forth battle, were led by Sabrina Ionescu who had a game-high 31 points, seven rebounds and seven assists. Satou Sabally contributed 22 points and forward Ruthy Hebard scored 14 points.

Though they were tied 59-59 through three quarters, the Ducks set their distance from the Bulldogs with 29 points scored in the final period and a gritty defense. It’s a reversal of the previous two seasons, when the ducks were eliminated each time in the Elite Eight.

At the final buzzer, Ionescu jumped into Hebard’s arms and coach Kelly Graves flashed an “O” with his hands to the crowd. The overwhelming majority Duck fans chanted “One more year!”at the junior guard, who is rumored to be eyeing going pro in lieu of a final season, as she cut down a piece of the net.