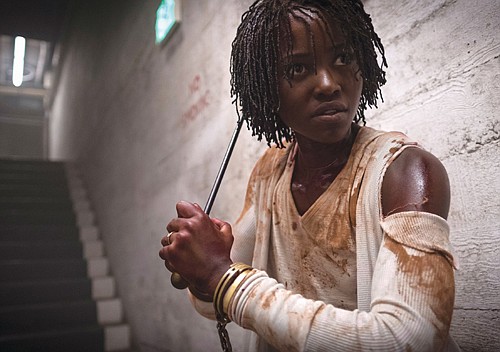 It's impossible to engage too far with the substance of Jordan Peele's second film, "Us," without spoilers--and the film is best seen the first time without knowing what is happening. So I will first say a few things that may encourage you to see the film, if you haven't, and let you know when you may want to stop reading before actually seeing the film.

"Us" is more disorienting than Peele’s first film, "Get Out." Although I found that film very scary, I identified the fear specifically with racism. "Us" is more subtle.

It's also more truly a horror film. Although "Get Out" very consciously makes use of horror tropes, the term "social thriller," which Peele himself has used, feels more accurate. It's scary in the way racism is scary. "Us" is scary in a way that I would identify as more typical of horror films.

It's the first time or one of the first times for all of these and many other things--and the film is not really about race, at least not as directly as was "Get Out." Representation matters and Peele is conscientious about depicting a broader range of black experience without calling it out or making it the whole point of the movie.

I also especially appreciate the extraordinarily high quality of intention that Peele puts into every moment of his films. "Us" like "Get Out" is built for multiple viewings--and though that may make his films a smart financial investment, I am inclined to believe that money is not the driver. Peele has things to say, about things we most definitely do NOT want to think about. I suspect that part of what is happening--perhaps quite consciously--is that he hopes to break past our barriers to thinking about this important content by putting out lots of bait for us to come back for again and again.

So once again, even if you don't like horror films, my strong advice is to make another exception for "Us." Peele's work continues to be ground-breaking and important. He is doing things no one else is doing and showcasing work (including, here, from a uniformly amazing cast) that we don't get other opportunities to see.

And now let me venture into spoiler territory. Other important reasons to see this film have to do with the important ideas Peele wants us to wrestle with. They include the idea of privilege, our fear of the "other," the ways in which the comfort of some is intimately connected to the suffering of others, and how even marginalized people frequently respond to success by simply grabbing for what they can with little real concern for who is left behind.