Students give back for Habitat for Humanity 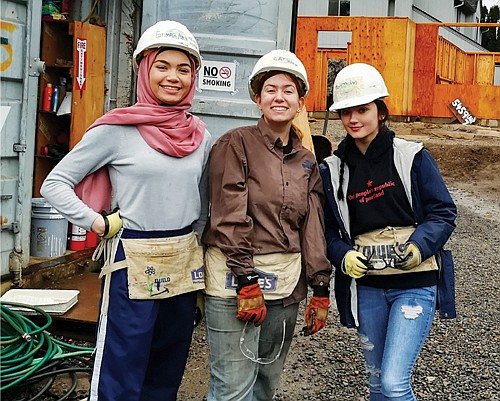 Rainy weather didn’t douse the spirits of a hardy group of student volunteers from Oregon Connections Academy who put in several hours of hard work at Habitat for Humanity’s build site in the Cully Neighborhood.

Fifteen new affordable homes are currently under construction at the site located at Northeast 57th and Killingsworth. Oregon Connections Academy is a full-time tuition-free virtual public charter school enrolling thousands of students in grades K-12 across the state.

“It was very interesting to learn about the building process of one of these homes, I feel very privileged to be involved in helping one of these families, whose lives are changing as we speak,” said Oregon Connections Academy sophomore Camille Fox from north Portland. Camille brought several construction skills with her to the Habitat for Humanity Build Day earlier this month, having learned them from her carpenter/remodeler father.

According to Melinda Musser, communications director for Habitat for Humanity Portland/Metro East, one duplex is almost finished and two more units are getting prepped for insulation and sheetrock. Volunteers, such as those from Oregon Connections Academy, AmeriCorps, and Habitat construction crews are working on internal finishes including flooring.

Madi Beck, a senior at Oregon Connections Academy from north Portland, hopes to join AmeriCorps after graduation and she’s refurbishing her own vintage trailer.

“I had so much fun at the build!” Madi explained, “Camille and I were working on putting down snap-together floating flooring in one of the houses. It was a really good skill to learn, and I'm going to use the same type of flooring in my trailer when I redo the floor! So not only was it a good time, but it taught me great skills as well.”

“I ruined my clothes and shoes but I didn't care because at the end of the day I was doing something helpful to the future homeowners,” said Fatimah. “I was painting so much to the point my arm was aching, but I still kept going because honestly, I was so motivated working alongside one of the future homeowners who also came to do some work. The day was overall great and having a team and leaders who were positive and enthusiastic was amazing.”

According to Musser, volunteers have put in a total of more than 2,300 hours so far while building homes at Cully Place. She noted Habitat homebuyers put in 300 hours of sweat equity building their home and completing homeowner education classes. Musser reports seven homes will be completed this summer and the first home dedication is schedule for mid-June.