Tips to help you get prepared 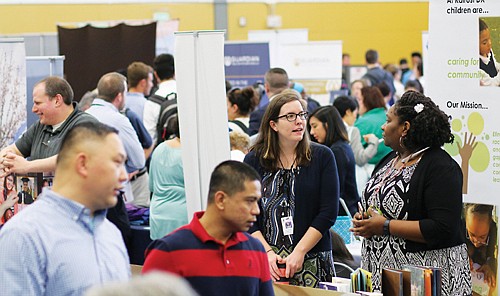 The Portland Community College Job Fair will once again bring a who’s who of Portland-area employers to the Cascade Campus gym in north Portland. The annual event is slated for Tuesday, April 30.

Several of Oregon’s most admired companies will be on hand this year when the Portland Community College Job Fair returns for its 22nd year.

Columbia Sportswear, Oregon Health & Sciences University, Providence Health & Services, and New Seasons Market all rank among the most admired and respected companies in the state and they will be among more than 100 area employers represented at the PCC Job Fair from 11 a.m. to 3 p.m., Tuesday, April 30, in the college’s Cascade Campus gym, 705 N. Killingsworth St.

Becky Washington, career services coordinator at the Cascade Campus, said with the unemployment rate at or near a historical low, employers are competing for the most qualified candidates.

“It’s a good time to be a job-seeker in Portland,” Washington said. “This is a great chance to put yourself on the market.”

Washington said one of the most appealing aspects of the fair is the opportunity to meet with and speak to a number of employers in succession. This means a job-seeker is able to compare and contrast the compensation packages available from various employers and industries, and get an idea of how his or her qualifications measure up.

The PCC Job Fair is a who’s who of Portland-area employers such as Amazon, Portland Trail Blazers, and OnPoint Community Credit Union. In addition, there will be a host of local and regional nonprofits and government agencies participating.

Students in nearly all of PCC’s professional/technical programs can find an employer at the job fair that is related to their degree or certificate. Many job fair employers are offering internship opportunities, as well.

A complete list of participating employers can be found at pcc.edu/cascadejobfair. The web site has tips on how to dress and what to say, including a brief video on developing an “elevator pitch” for employers.

“We encourage people to dress like they’re going to an interview,” Washington said. “And because we attract lots of job-seekers, it’s also a good idea to show up early.”