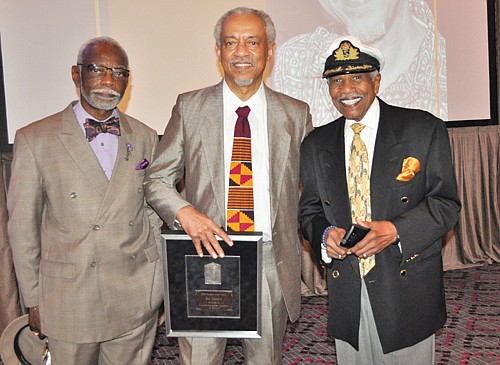 On Friday, a lifetime Portland First Citizen award was presented to Ron Herndon on behalf of the Portland Metropolitan Association of Realtors, an annual award that forms an honor roll of city’s most prominent leaders.

The director of Albina Head Start for more than 40 years, Herndon has advocated for children and families for generations, working to solve issues impacting the black community and low income families.

Here’s a capsule of some of Herndon’s achievements as shared during the award ceremony:

Known by everyone as “Ronnie,” he grew up in Coffeyville, Kansas where he was raised by grandparents who emphasized the importance of education. Though surrounded by social injustices in a deeply segregated town in the 1940s, he was expected to succeed through a value system of sheer determination and hard work.

Those lifetime values have served him throughout his career as a catalyst for change.

Herndon moved to Portland to attend Reed College under a scholarship. After graduating with a degree in history in 1970, he went on to graduate studies in Liberia and Nigeria. Back on U.S. soil in the 1980s, he focused on education and became an activist working to solve issues affecting the African American community, culminating in his appointment as Director of Albina Head Start in Portland for more than four decades. Head Start’s mission is to serve children and families by providing child growth and development services and education to strengthen and enhance their abilities to successfully function in society.

Under his leadership, the organization has grown from 126 children and families in 1975 to serving more than 1,000 children at 25 sites today. He also served as President and Board Chair of the National Head Start Association from 1991 to 2013, where he provided leadership and support to Head Start programs across the nation.

His public service also includes co-founding numerous community-based organizations such as the Black Educational Center, an independent primary school designed to meet the academic and cultural needs of black children. While no longer in service, at that time the center grew from a summer program to a full-time school serving kindergarten through fifth grade.

His work as a teacher, counselor, college instructor VISTA volunteer and activist has impacted countless families and young lives.

Herndon sums up his life’s work in his typical understated fashion, “If we do this well then young children will have the possibility of living more independent and fulfilling lives.”