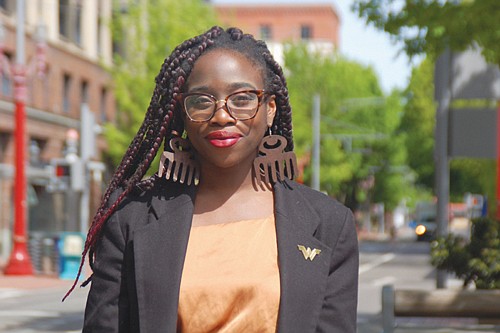 Shanice Clarke, one of the two African American community leaders who ran for the Portland School Board last May, has been hired as the district’s new director of community engagement.

Clarke, who lost to long time resident and Portland city employee Michelle DePass in the election, accepted the new job last week, continuing a commitment she expressed during her campaign to elevate the power and voices of students, families and community to advance student achievement.

Clarke will leave her current position at Portland State University to take a lead role in forming the Portland School District’s strategic direction for public dialogue as part of a Strategic Partnerships and Engagement team.

“I ran for the board because of my deep commitment to advocating for racial equity and social justice in our public schools and creating deep opportunity for our community to be involved. My new role will allow me to braid the knowledge and experiences of our community to re-imagine PPS,” Clarke said.

A career educator who is originally from Jamaica, Clarke is joining Portland’s largest school district after helping to launch and run a resource center for black students at PSU aimed at supporting their continued education and elevating their voices, called the Pan-African Resource Center.

In her bid for school board, Clarke ran on a platform of incorporating a holistic approach to education, including doing crisis intervention and focusing on improving systems to address students’ needs. She cited an audit of Portland Public Schools by Oregon Secretary of State’s office showing dramatic shortcomings in outcomes for students of color in the district as helping to inform her on the needs.